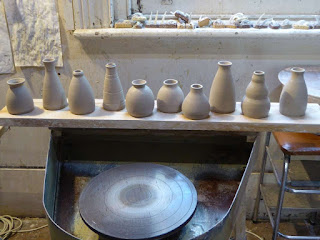 Last week I made some small vases on the potter's wheel. These range from about 4 to 6 inches in height, and it has been fun trying out different forms. It is amazing how many variations it is possible to come up with, and I have lots more in mind!

At some point in the week the sun was out, and it almost felt like Spring... rather than late Autumn, and we spied a butterfly sitting on a flower that stayed there long enough for me to get the camera and take a few photos of it. 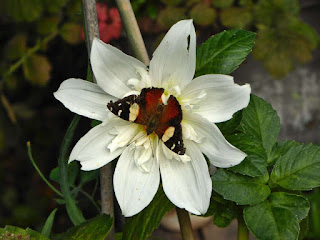 On Saturday morning I got a strong "urge" to get up on the roof at the back of our house and clean out leaves and other debris from the gutter, and make sure the down pipes were clear and working. It is not a high roof, and there is an area with only a gentle slope to work from, but getting up a ladder is not as straightforward as it once might have been, because I injured my remaining "good" shoulder at the beginning of February (a small tendon tear), and the various pills and potions I consume daily for a blood disorder tend to make me a little giddy, but I got there, and found both outlets from the gutter almost clogged, so I was able to make myself useful! When it came to the moment of truth, the "dismount" from high places proved more problematic than my ascent and, fortunately, Laura was on hand to shift the ladder to a slightly easier position for me... otherwise the roof may have become my home for a bit longer. The view from up there is actually rather nice!

Another job I had an "urge" to get done the same morning was to harvest the last of the potatoes from the vegetable garden, and pick the solitary pumpkin that I had managed to grow this year.... a rather small and lonely member of the genus Curcurbita, but one on whom the continuation of the line of pumpkins I have grown for the last 3 years, depends!

For me, the day of harvesting pumpkins (or pumpkin) really marks the beginning of winter. It is a declaration that nothing further can be achieved by keeping the pumpkins in the garden, there will be no further ripening, nor increase of size, and the risk of a frosty night is now too great. 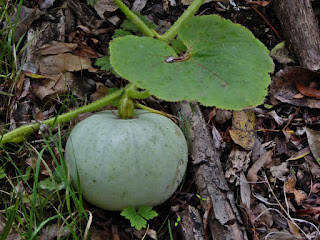 So I gazed somewhat sadly at the pumpkin, before raising my knife and severing it from the vine, and reflected on the summer past, and the winter to come.

It was not a good season for pumpkins or tomatoes. The tomatoes flowered well, but the days were rarely hot enough to allow pollination to take place easily, hand pollination did help, but from what I have read, tomatoes really need the mid temperatures in the mid 20s (Celsius) to complete the process. I think the lack of real summer heat affected the pumpkins too, male and female flowers rarely occurred at the same time, and the vines struggled to grow with any real enthusiasm. The solitary female pumpkin flower that bore fruit was fortunate to have had two male flowers arrive just in the nick of time, one on the same vine, and one on a rather pathetically unwell vine that all but expired with the effort of flowering! I feel quite a fatherly bond to the pumpkin as I assisted the pollination process with a nice sable water colour brush, carefully transferring what pollen I could find from the two flowers, and hoping that it would be enough... and it was!

As we reverently carried one small pumpkin, 4 tiny runner beans, 6 small half ripe tomatoes and about 2 kilograms of potatoes back to the house, a few flecks of rain fell from a sky that was the colour of a sheet of galvanised iron. 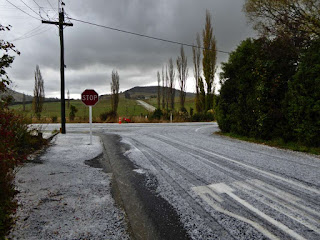 Shortly afterward, the heavens (as they say) "opened". I am not really sure how hail the size of large peas, and the colour of a pearl necklace, really equates to the idea of it having a heavenly origin... but dense pebbles of the stuff pelted with increasing enthusiasm, and the rattle and swish of it was accompanied by booming rolls of thunder, and a remarkable quantity of rain. 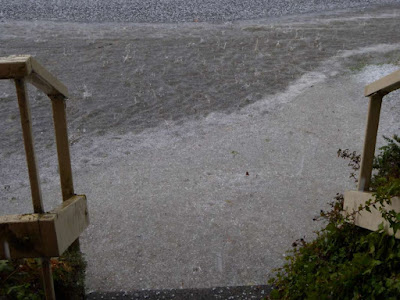 The ice quickly filled the recently cleaned gutters and down pipes, and with that means of escape blocked, water cascaded from the roof to the ground by what ever means it could improvise. 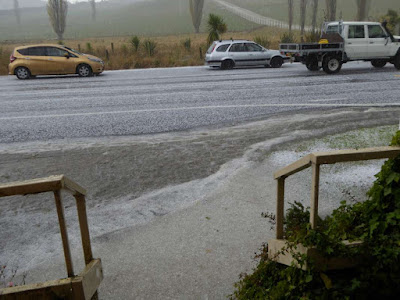 Out the front of the building, the storm water drain by the main road blocked and  the edge of the road, and the footpath, became awash with a mixture of ice and water. Most cars slowed, or pulled over to a complete stop as drivers feared for their windscreens, a few crazy fools continued driving at pace.

The fall of hail was quite prolonged, and, as I write this Monday morning, we still have some shady areas in the garden that are adorned with white. 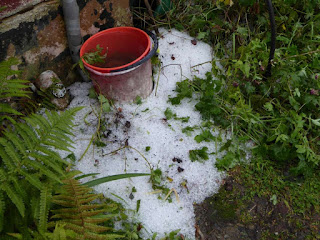 Whilst my morning's cleaning of gutters and down pipes did not prevent chaos when the hail was at its worse, the water could at least clear away faster when the deluge had abated. We had one leak into the building, a rather odd one in the gallery that must have been due to water getting up under the ridge of the roof, but other than that we escaped fairly lightly. 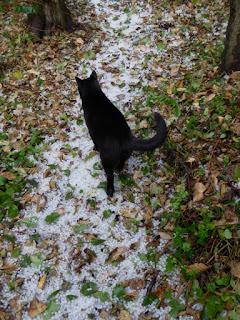 After the heavens had "closed"... well, I assume they must if they "open", I went for a tour of inspection with Mr Smaug. He was very brave about walking on ice with his bare feet, definitely not quite happy about the chilly sensation between the toes, but still curious to explore the oddly changed world that he found around him. 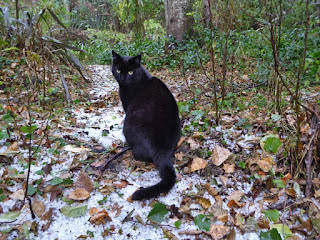 It was worth getting down to the level of Mr Smaug and looking closely at the ice. 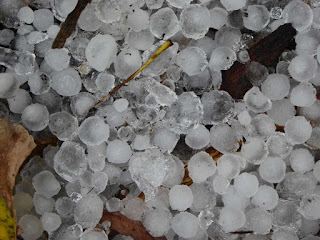 Whilst most of the ice was an opalescent white, there were some glassy crystals, and others that had joined their neighbours in the happy plunge from the lofty clouds to terra firma. I remember a brief time when the hail was falling when the pieces became noticeably larger and oddly shaped. 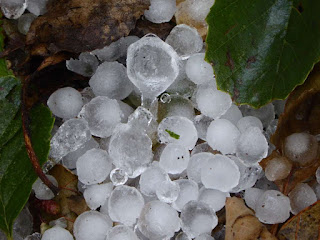 Hum, we may be able to salvage some of the green tomatoes that were packed in ice, 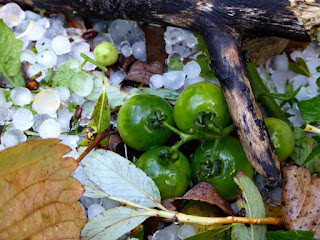 but it is just as well that I picked the pumpkin before the storm, what was left of the vine was completely shredded. 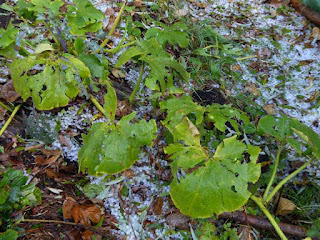