Six o'clock Sunday morning saw me out of bed and propping open my electric kiln lid to let out the last of the heat. It was action stations, I was due at Gallery on Blueskin at 10am where I was doing a demonstration of pottery. I had to get the kiln unloaded and the contents sorted and anything good enough packed to take to the gallery, and I also had to get the car loaded with bags of wedged clay, that I had kneaded the day before, knives, needles, kidneys, cutting wires, buckets, bats, aprons, sponges and water bowls (all the sort of things that you would not be able to carry on an aeroplane these days!). On Saturday night, Nathan, who's wife Nicky works at the Gallery, had kindly transported my kick wheel to the gallery for me, so at least I did not have to manage that bit.

I made it to the gallery by 10.05am (which was quite a good effort, considering) and already found a great sea of activity, with a large tent structure being set up by a team of children who were following orders that were given by Nathan, who was showing that men can multi task too! 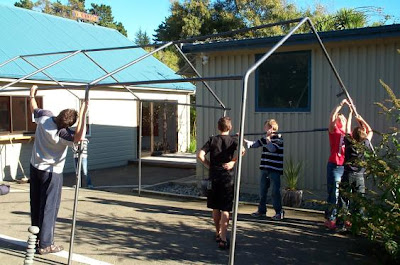 Putting up the tent frame was like some sort of dance.

After the occasional glitch, "The cover's upside down isn't it?", a very impressive open sided tent stood merrily above two potter's wheels and a variety of small tables. 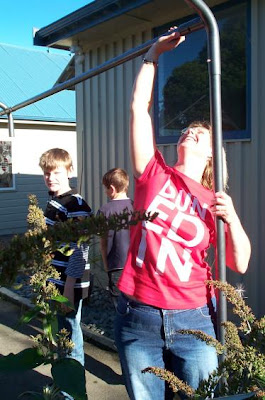 Much of the morning was spent getting set up, throwing some pots, and talking to a few children and adults. Nicky kindly agreed to helping with the children with hand building and pinch pots (she's a trained OT), whilst I concentrated on wheel work.

It is occasionally an advantage having a sieve for a brain that rarely remembers names, as I can comfortably chat with people and enjoy them as people without the burden of shyness that can come upon me when I know "who they are"! I had the great pleasure of talking to one such kindly and interesting man who "had been a potter", and showing him some of my pots at the gallery. It turned out that this was Ray Rodgers, a New Zealand potter who has lived and worked both in NZ and Australia, with time also spent in America and the UK. Ray won the Fletcher Brownbuilt International Award in 1983, and is especially noted for his use of the pit fired technique. It was in 1997 that he demonstrated his work at Aberystwyth, in the UK at the International Ceramics Festival. Anyway it was real treat for me to be able to meet him.

Laura brought me a sandwich just after midday, and I was just starting to think that things were going to be fairly easy going, when...., people turned up, and kept on turning up. I then worked right through to 4pm from 12.30 with no break other than attempting to swish down coffee or water that Louise, the Gallery owner, mercifully brought me to keep my vital functions functioning. I gave quick hands on lessons to adults and children. 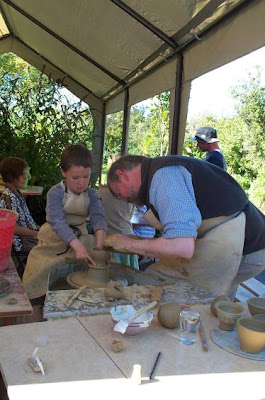 Here I am helping a young fellow with his pot on the kick wheel. I am standing on one leg, kicking the wheel as well. It is all part of the service!

I am not sure how many in total sat at my wheel as I helped them form a lump of clay into something that resembled a bowl or a mug, but I imagine it was between 15 and 20, maybe more??. After 4pm and a lightning fast slice of Nicky's yummy chocolate cake and more liquid, there were more people. 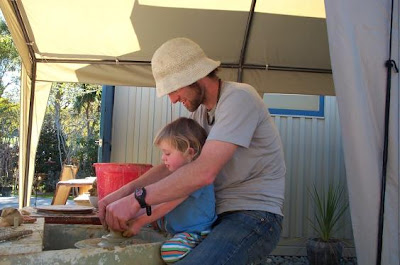 Starting them young. A father shows his daughter the art of potting.

I think we got packed up by just after 6pm. 12 people had paid to have their work fired, so the next challenge was to get it home. I found that most of it could be persuaded to sit on a bat, sometimes with a little coil of clay to make things firmer. To my surprise and relief, all travelled home OK. Because it had been a warm day, the pots were drying fast, so I flipped the bowls over and foot ringed them on my electric wheel, as most were very thick in the bottom. Somewhere after 7.30pm, as I was just finishing the last little bowl, Nathan kindly delivered my kick wheel home again.

Naturally, I was very tired at the end of all that, but it was an interesting experiment, taking the wheel to the people, rather than waiting for them to come here. It was also a chance for me to introduce people to the magic of clay. A responsibility too!

A big thank you to Louise for cheerfully agreeing to this event taking place at her gallery, Gallery On Blueskin, (and for many cups of coffee), to Nicky (for helping with people and clay work and for baking the chocolate cake), Nathan (wheel transport, organisation of tent assembly, and supervising 6 children), Laura (helping me get everything into the car and making sure I was fed), to all the children that helped with the tent and other duties, and to the people who turned up and made the day possible.

Happily the firing had turned out well, so I was able to bring 9 chun bowls and 4 mugs with me to go on display and two bowls and a mug were sold whilst I was demonstrating. 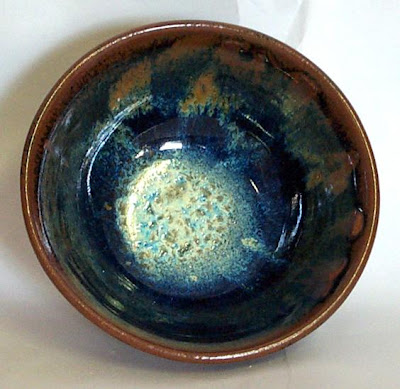 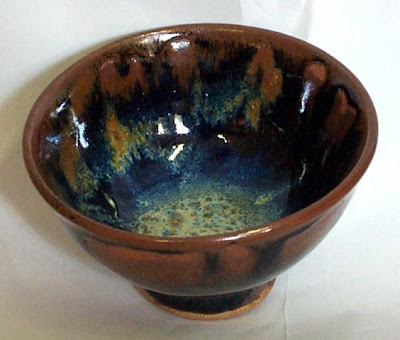 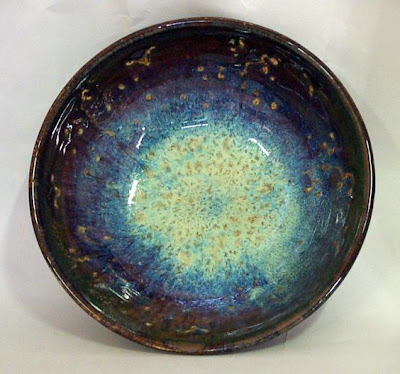 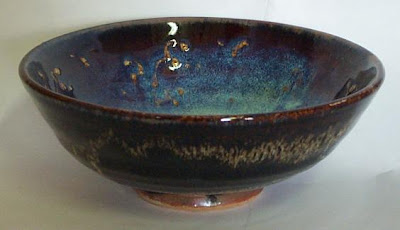 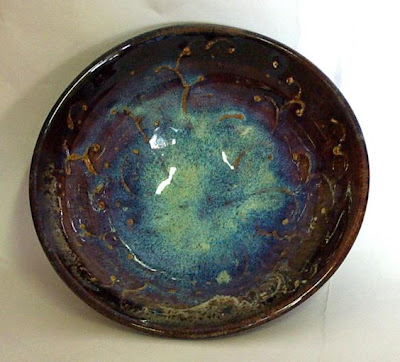 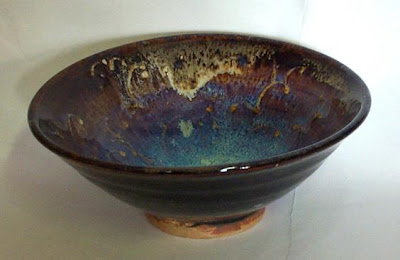 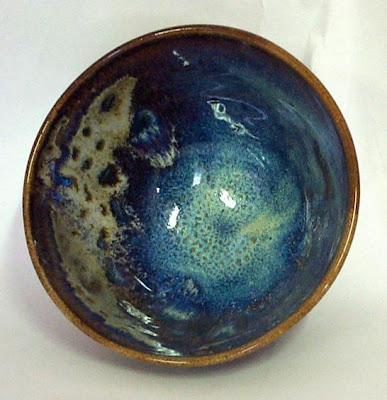 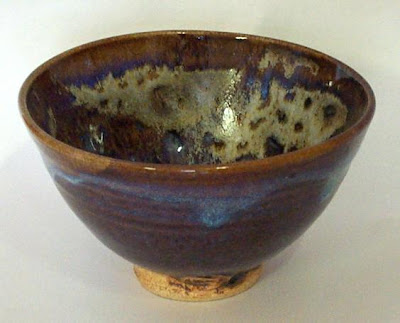 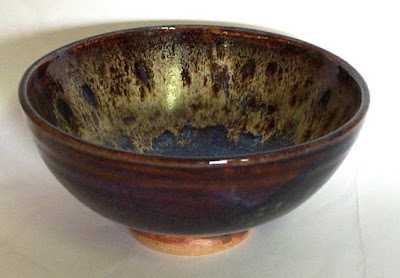 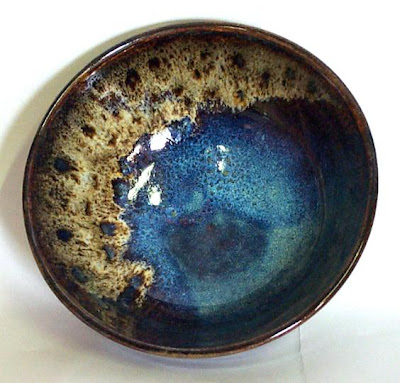 i love the idea of kids and pottery... great to see them working

Thanks Jim for your comment, welcome to my site. It was a real treat to be able to introduce so many young people to clay on the weekend. I also have some turn up at my studio when we have our first weekend of the month open studio weekend. I enjoyed having a look at your blog site. It is so good to see you and Sofia working together with clay, and sharing the joy of it. P.

Hi Peter, thanks for your nice comments on my blog, today is the only day of the week i get to do other stuff because the court is closed, so nice to catch up on things. I love all the kilns looks like great fun.

Hi Peter: just read your post on my blog and came over to yours for a visit. What a nice blog, I'll have to add you on to my list. Thanks for your comments!
Tracey

Hi Paul and Tracey, welcome aboard! It is lovely to hear from you and a real encouragement too. Best Wishes, P.

Hi Peter, What a wonderful and busy day you had demonstrating and helping folks get the feel of clay. Your chun glazes turned out so beautiful, what wonderful colors you got. Love the gold and the blue together, especially in the last photo.

Also love the watering can glaze photo to the right - the one glazed only by the fire - very nice.

I sent you an email.

Thanks for your comments. The last chun bowl with the blue and gold is probably my favourite. I do find that I have to take a risk with the chun glazes. Mostly there are three or four glazes applied wet over each other. Sometimes I get crawling, but they seem to work best right on the limits of probably starting to crawl and then healing in the kiln. The gold looking glaze is a Len Castle chun. Len Castle is a wonderful (now 85 years old) New Zealand potter who has been really successful in getting to the essence of the New Zealand volcanic landscape and sea and expressing the excitement and beauty of it in his work. There are a couple of really lovely books about Len Castle, one I have is called "Len Castle Potter". There are quite a few images of his work if you do a google images search. Best Wishes, P.

Lovely work. I'm wondering if you can give me the recipe for the Len Castle chun glaze?

Hi Joanne,
Good to hear from you. The Len Castle chun glaze that I have used is as follows:

The above recipe is from the book, "Len Castle Potter", published in 2002.

I have tried Gillespie Borate as a substitute for Gerstley, and have tried several frits, all with success. Really the glaze will need to be tested and tweaked to suit your own kiln and firing schedule. It is well worth considerable experimentation with the iron bearing slip or glaze that you use under this glaze. Also the clay body is probably important. I have used Southstone from Southern Clays, Dunedin for much of my wood fired stoneware. It does have quite a lot of iron oxide in it, and I suspect that this is helpful with chuns... but unhelpful with some other glazes!
Anyway, good luck, and I hope the above information is a useful starting point.

Dear Peter,
New to your blog. It is amazing all the people I've never met who share the same interests!
Anyway, thanks for sharing your "secrets" with us all.
I really want to build a working woodfire kiln. I am not sure if I could stand to go through 6-7 iterations, however. I was disappointed that your second kiln didn't work because it looked so cool.
Anyway, very nice to "meet" you!
Joe Troncale

I love the bowl in the last photo. Very very beautiful. Idk anythung about pottery , but I have a couple pieces that I want to know more about and don't no who to ask.. your work is amazing

Hi Crystal,
Good to hear from you, thank you for your encouraging words. You mention having a couple of pieces that you want to know more about. You are welcome to ask questions here if you like, but you may find the help you need if you ask a local potter, or ask at a gallery that sells pots, or ask at a pottery club if there is one near you. What part of the world are you from?

Hi Joe,
So sorry not to have noticed your comment sooner, I do try to respond to everyone that writes in if I can, and don't know how I missed you. I see that you wrote 5 years ago, but I send sincere apologies just in case you come across this again. I hope you did build your wood fired kiln and have had an enjoyable time firing it.