Formulating and Firing a Crystalline Glaze

I am writing this blog post whilst firing a crystalline glaze so I will be rushing out to the kiln shed every 30 minutes or so. Hopefully you won't be distracted by my regular brief disappearance!

The fact that I am firing at all today does show that I have a working electric kiln again, in fact both are now "clothed and in their right minds" as the Good Book would say! The kiln that has a new contactor is cooling down after a regular stoneware firing that it did two days ago with the help of the controller, and the smaller manually controlled electric kiln is the one doing the crystalline glaze firing, its second since changing the elements.

There was a frost overnight and Laura excitedly called my attention to an icicle that had grown on the rim of a bucket that had been left under the garden hose. Dripping at a rate of one drip every two seconds or so the water had frozen into an stalagmite that was about 4 inches high!


Firing crystalline glazed pots is different to other firings. There are two very important targets to fire to, the first is the peak temperature, currently I am firing to Orton Cone 9, and this is followed by a lower temperature that is likely to be around 1100 Celsius (2012F) which may be maintained for several hours to grow the crystals.

In this blog post I will touch on the first of those two temperatures, the peak temperature. I will say more about the second important temperature, the one where the crystals have a chance to grow, in a separate post.

Several things determine how many crystals grow on the pot that is fired in the kiln, here are some of them:

The first three items are taken care of before the pot goes in the kiln!

1) The clay body needs to be low in iron, fine textured, and mature at a temperature appropriate to the glaze, some crystalline glaze potters would go for a clay body that matures 2 cones above that of the glaze, because the alkaline crystalline glaze is an aggressive flux. Really the choice is between a porcelain body, or white stoneware. A coarse texture will "irritate" the glaze enough to cause numerous unwanted small crystals to form over the course of the firing. A crystalline glaze is highly caustic and will attack the clay body when at high temperature, some clay formulations may leach out flux or alumina and have a detrimental effect on the ability to make crystals. You really have to experiment to see what will work.

is where many recipes begin, and if you look at a few dozen of them, you will detect that most are variations on this.


A glaze may have a small amount of china clay added, probably between 0.5 and 1.5 percent to add just a trace of alumina to help to control glaze flow and crazing. Or there may be an additional flux added to lower the maturing temperature, you might see Lithium carbonate, talc, or dolomite in some recipes for this.

1 - 3 percent of Titanium dioxide or Rutile may be added to a crystalline glaze base recipe to help stimulate crystal growth. Larger amounts can make a glaze opaque.

Zinc oxide may be as low as 20 percent or as high as 30 percent, this figure is one that can be adjusted to control crystal growth on different clay bodies and for different temperatures.

Just to confuse things further..... the various metal oxides that can be added to the crystalline glaze base to give an attractive palette of colours have an effect on how fluid the glaze is. Copper and cobalt may make the glaze more fluid, where as nickel could have the opposite effect.


Silica also can appear to be as low as 14 percent in some recipes, but be aware that silica can be supplemented by adding china clay, bentonite, talc, frit, feldspar and so on, so the silica percentage in the recipe might not tell the whole story, you really need to see the glaze formula to understand what is in it more clearly. Someone wrote that silica is like "water" in which the crystals form, and you need enough of it for that to happen. I thought that was a rather nice analogy.

There are other ways of making crystalline glazes. I also enjoy crystalline glazes that use feldspar to supply the primary flux instead of relying on a glaze frit, and there are some that work well, if a little temperamentally.


What ever the formulation I always add 1 - 2 percent of bentonite to my crystalline glazes, it really makes a great difference in how the glaze behaves in the glaze bucket, its ease of application, and how firmly it stays attached to the pot before it is fired.


3) Glaze thickness influences crystal growth. Too thin gives "nowhere" for the crystals to grow, and they are too much affected by the clay body so you get thousands of them.


Too thick can yield too few crystals on a vertical surface or a mass of coarse "sand paper" in a pool in the bottom of a bowl where the three dimensional crystals have grown strongly upward as well as outward.


"Just right", will allow for good sized crystals to grow surrounded by some space.


I mostly brush on crystalline glazes (I have sprayed them and also dipped and poured them in the past). I apply at least three or four thick coats on the top third of the pot tapering to two coats near the foot.

4) The Peak Temperature of the firing, this is crucially important. Always use cones to determine this. Small variations, a mere 5 degrees or so, will make a noticeable difference in how many crystals cover the pot. If you fire at too low a temperature there will be far too many crystals that might even feel rough or dry. If you fire too high you will be left with few if any crystals. Just right, is a matter of taste.

Large crystals can look very impressive if they are surrounded by plenty of "empty" glaze, but crystals that cover a pot can also be spectacular.

5) How quickly the kiln fires. In my previous post I mentioned how important it was to have elements in good condition when firing crystalline glazes. In spite of accurately firing to cones, cone 9 reached rapidly will give a different result to cone 9 that has been reached slowly. It may be that the aggressive nature of the alkaline glaze has something to do with this, as a long while spent at high temperature gives more opportunity for glaze to interface with clay body. What ever the reason, it gets harder to grow nice crystals if the kiln reaches temperature too slowly. I suspect that this is especially the case with frit based glazes that go into a fluid state much earlier in the firing than a feldspar based glaze.

6) How long the kiln is held at peak temperature. It may seem counter intuitive to hold the kiln at peak temperature after being in such a rush to get there, but a hold here can help fine tune how many crystals remain on the pot. What is happening here is that surplus glaze is flowing off the pot, (yes you did remember to fire with a glaze catching bowl!?) and also more of the zinc is going into solution.


A simple Glaze and Schedule
Well, after all that, my head is buzzing, and you may be asleep or have run away! For those who have stayed the distance I hope this little introduction does show some of the many variables and complexities involved in firing this sort of glaze. Those determined to give it a go should definitely have a try, and the following recipe will give you something to play with at cone 9 - 10

Use porcelain or a smooth white stoneware.

Protect kiln shelves, take note of my previous post where I have written about glaze catching bowls and rings.

Record your firing hourly, or more frequently, on graph paper.

Well I am nine hours into my firing as I finish this episode of the blog. We hit peak temperature an hour ago, and now I am half an hour into the long hold at around 1100 Celsius (2012F) where crystals will have the time to grow to a good size. You can generally count on an average of about 10mm per hour of crystal growth at this temperature, and I will aim to grow these for 4 and a half hours.

charlie said…
Hi Peter. Thankyou for a fascinating exposition of what must be about the most tricky glaze process that can be done. And your always very generous sharing of hard won knowledge. Charlie
May 20, 2020 at 7:17 PM

Peter said…
Hi Charlie, thank you for writing in. I feel like it is good to try to share things whilst I still have some of my wits about me! :-) I already find myself using my own blog to remind me of glaze recipes when I can't find where I have scribbled them!
May 20, 2020 at 9:28 PM

gz said…
That book on crystalline glaze firing that you are writing...!!
Well done on all this research and work and fascinating discovery.

Linda Starr said…
I had to keep refreshing the page to get the photos to download, worth every bit of time it took, so many lovely pots there and amazing amount of research
May 21, 2020 at 2:06 AM

I do sometimes wonder about "That Book"... I do tend to go on far to long for a blog when I get started! :-)

Thank you for sticking with refreshing the page, I'm sorry that it was slow to download for you. I try to keep the size of the photos very small to help them arrive easily, but the internet is a mysterious thing! Glad you enjoyed the photos once they arrived!
May 21, 2020 at 4:20 PM

Anna said…
Hi and congratulations to you and your NZ friends for being able to be free of the Covid19 restrictions.. hopefully Oz won't be too far behind you.
A great description of the crystalline glaze process which I will share with my fellow potters. Stay warm this winter.
June 10, 2020 at 2:02 PM

Yes it is good to be Covid free (for now anyway!), quite a shake up to our health system just getting ready for it. Hopefully, with the experience gained from this episode, we will be in better shape now to deal with it if it gets to us in any numbers again.

I hope to get the next part of this glaze firing series of blog posts out in the next few days.
All the best,

I see you have been busy. What amazing crystals! I can see the passion in those pots. Hope you and Laura are doing fine in during the Covid-19 pandemic.

Lovely to hear from you. Laura and I are doing OK regards the pandemic as NZ is almost free of it currently, but there certainly were a lot of day to day changes to how we live life all through the time of "lock down" that we had. The peace and quiet of full lock down when there was little traffic on the road, and we made bread, really appreciated vegetables from our garden, and rarely went to the shop, was like stepping back in time.... even the birds started coming inside the house! Not sure how NZ is going to re-connect with the rest of the world again, it is quite dilemma, but our isolation is keeping us safe for now!

Hope things going OK for you? 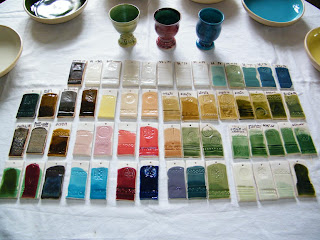 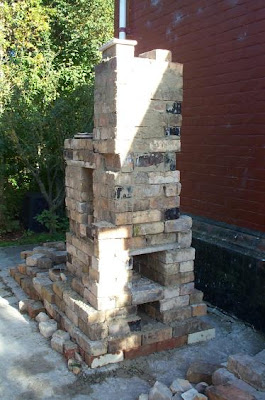 My Woodfired Kilns, all 7.