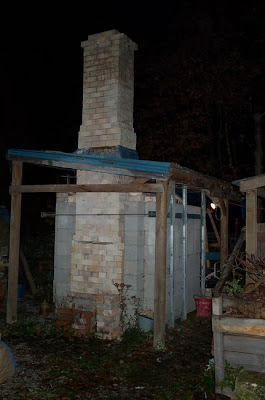 I started the firing at 2.30am. (I wish the night sky would show up in the photograph, but my little camera just won't do stars). The little fire that I had lit at 4.30 and kept going until we went to bed at 11pm had warmed the ash pit nicely, and I had only to put a sheet of newspaper and some small bits of wood in there for them to flare into life without needing matches. The kiln had held onto its 100 degrees C (212 F). 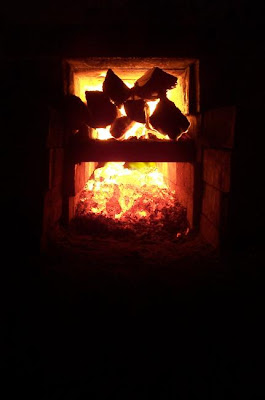 I like to go very slowly at the beginning of the firing, especially as some of the work is quite large. What I do is I slowly build a fire in the ash pit below the grate. Just a very small fire at first right at the mouth of the firebox. Then I progressively push the hot embers back into the ash pit, until they are the full length of the firebox. I do this over about an hour and a half.

I went from 110 C (230 F) to 270 C (518 F) in 2 and a half hours. At this temperature I started adding wood above the grate, and phased out the ash pit stoking, there being a really good layer of incandescent coals burning in the pit (as you can see in the photo above). The next two hours have averaged 100 degrees C ( 212 F) per hour. I have to hold back the kiln at this stage, to stop it climbing too fast. 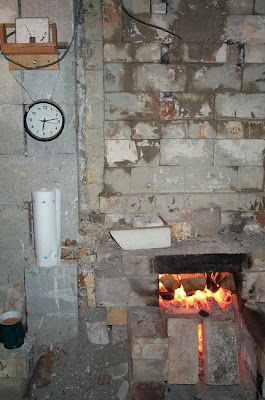 I've partly covered the ash pit with a couple of fire bricks here, and jammed a lot of wood into the mouth of the firebox. This slows things down somewhat. I also can control things a lot with the chimney dampers. 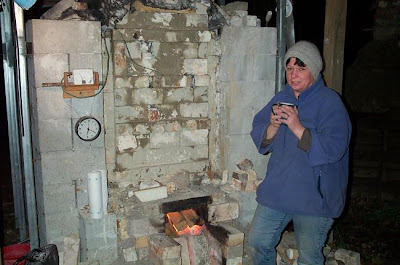 Laura brought me a very welcome cup of tea just after 6 am. 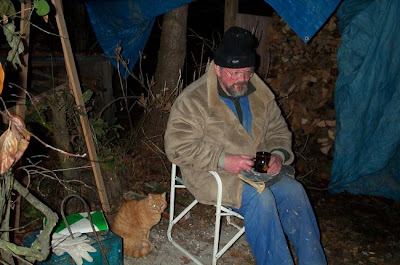 The kiln god decided to get up at 6 and join me too, which was nice. I'm well wrapped up as the air temperature is not far above freezing, and there is a light frost forming on some things outside as I write this.
Posted by Peter at 6:42 AM

Exciting :) Hope it's all going well. You just reminded me I need to buy a little clock - didn't have one last time and relying on the phone clock is useless.

I am so glsd you had support in such a lonely task. I was wondering how cold it was getting and does the weather ever shut you down competely?

Hi Andrew, good to hear from you. Well done for even attempting to use a phone clock, I have no idea how to use cellphones. I think my fingers are too big! Just had a quick look at your site (Erm..) and saw the wonderful jug that you have made. Congratulations. I love jugs, they are probably my favorite thing to make on the wheel.

Hi Patti, just a very light frost this morning, and I didn't really get cold thanks to woolly hat, gloves, overalls, two jackets, and a thermal vest, not to mention trousers and jersey and thickish shirt! The kiln may have helped too!

The majority of the firings have happened in the rain for some reason, and we have only been shut down by it so far on one occasion when wood, kiln, us, and everything else was sodden, and that kiln wouldn't have worked anyway, it was only the second that I had built and wasn't well thought out. The strange thing is that we rarely get rain here. A remarkably nice day so far today, especially considering an absolutely horrible forecast.

I must away to do some more stoking or else Laura might go on strike!