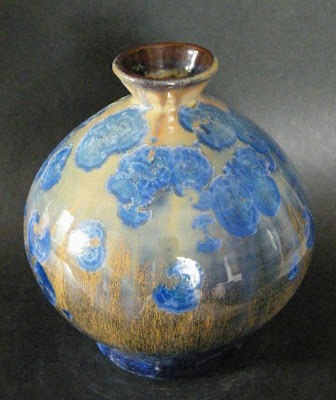 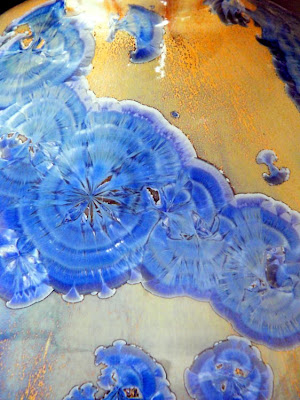 Close up of the bottle. 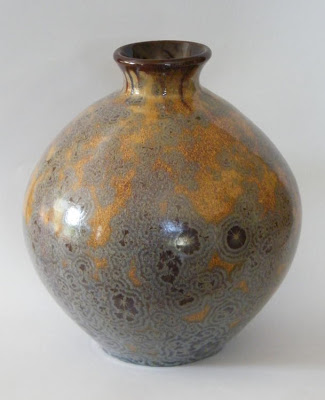 Vase (7.5 x 7 inches 190mm x 177mm). Twice fired crystalline glaze with iron and cobalt.
This pot came out of the kiln in the morning of opening day. The detail of the glaze made me think of bird's eggs. The pot had two glaze firings, which has made the crystals smaller and very complex. 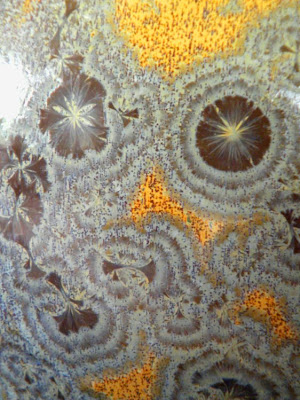 Detail of "the bird's egg" pot. 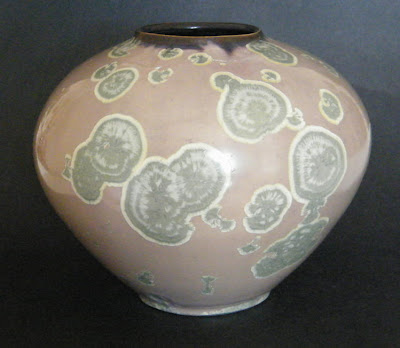 Vase (7 3/8 inches x 9 inches 187mm x 229mm). Crystalline glaze with titanium, first glaze fired in electric kiln, then reduction fired in a wood fired kiln.
This is the same vase that was featured at the beginning of my previous blog post. It had a white glaze before, and I decided to risk giving it an extra firing in a wood fired kiln in a reduction atmosphere. I was very pleased with the result. 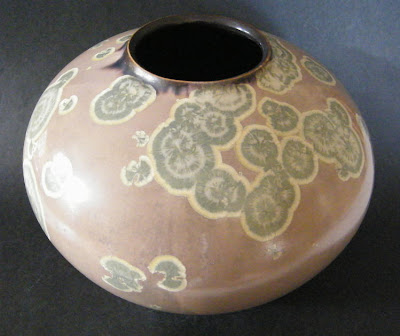 Detail of the vase. 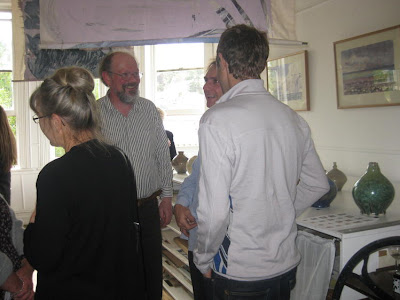 Manu Berry (centre partly obscured) and I at the opening of our joint exhibition (photo kindly supplied by Rhonda). 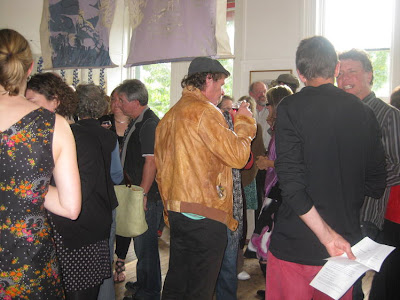 Exhibition opening...., quite a press of people there (Photo kindly supplied by Rhonda).

It had been a big rush all of opening day, with pots to unload from the kiln, glaze to grind from bottoms of pots, pots to photograph, catalogue to produce, pots to pack, and so the list went on. Laura worked up at the local shop until 4pm that day, and we were both quite tired by the time that we got into the car to drive to Dunedin. Our good friend Rhonda Beck, who is a wonderfully talented person, hitched a lift with us to the exhibition (Rhonda makes colourful and beautiful clothing, and does stained glass and mosaics).

When we arrived in Dunedin, it was Dunedin's version of the 5 oclock rush hour, which is not as bad as in some cities, but parking was impossible anywhere really close to the exhibition, and we had pots in the car and food for the opening too. After driving in futile circles around the centre of town, I had to stop and deposit Laura and Rhonda and all the things for the opening on the footpath. Then I drove away to a parking building to park the car. Rhonda very kindly stood guard over the exhibition things, and Laura began to carry them to the exhibition. Parking at the parking building was easy, fortunately, and I rushed back and was able to join in ferrying boxes to Manu's studio. We finally arrived at 5.30pm at the start of the opening. Two fellow potters from the potter's Co-op, witnessing my desperately late arrival, kindly helped by putting numbers by the 20 pots that I had on display so that they matched the ones in the catalogue.
The opening was well attended, and we were kept busy until about 8.30 in the evening. I don't think there were many sales really, but people enjoyed themselves and seeing Manu's new studio. I think that there is likely to be a short review of the exhibition in Thursday's Otago Daily Times.

Manu has made some lovely new prints that feature Central Otago wild flowers, bees and honey, and some of the prints hang from the walls, and from wires that traverse the studio. It was a pleasure to be able to share this exhibition with Manu, and I hope it all goes well for him. I will try to take some photos of the exhibition tomorrow when I am in town. For now I have put together a little slide show of pots that I have in the exhibition. I was particularly pleased with the reduction fired vase that is in this exhibition. It had its wood firing at the same time that I was doing a crystalline glaze firing in the electric kiln on the Wednesday before the exhibition. Laura was a great help in that she was able to fire the little wood fired kiln for me up to the temperature that I was planning to start reduction, so I only needed to fire for the last two hours or so. It is a nice kiln to fire, and Laura enjoyed herself.

A slide show of the pots that I have in the exhibition. Background music is Donovan singing "Catch the Wind". (The little button on the right of the bar under the video will make the video larger on your screen.)
If you in the Dunedin area over the next few days, the exhibition runs until March 16th, and you will find it upstairs at 140 George Street, Dunedin. Open Tuesdays to Fridays 10am - 5pm.
Posted by Peter at 7:03 PM

I am so glad it all came together in the end ...I hope sales pick up but it will all have been a great experience.
I love the close ups ...again such wonderful paterns on your pots ... the video is brilliant and I love the choice of music. I had forgotten how much I adored Donavan way back when. I am sure that was not the original recording ...it seemed a more mature performance ...probably wrong though lol
Good Luch with the rest of the Exibition xx

Your pots are gorgeous, the video delightful. Some of those crystal close-ups made me catch my breath! I'm so glad the exhibition opening went well. I wish I could hop on my broom and be there to see it for myself.

Hello Angie,
Lovely to hear from you. Glad that you enjoyed the video. As regards to Donovan,not sure when he sang that, but he looked incredibly young. He was singing sitting crosslegged on a mat, playing a guitar that had great wobbly lengths of string projecting above the neck of the instrument. There was a small and youthful looking audience listening to him. How colourful people were back then, and I envy them for the amount of hair they were able to grow!! I was moved and impressed by his singing, it takes a real talent to be able to sing something simple like that without the backing of other musicians or it being remastered in a studio. I found a video of him on the net, and I managed to extract the music from it. I had to extend it a little by grafting some of the beginning bit onto the end so that it would play the length of my slideshow. (I'll probably be locked up for a long time for doing that, but it is nice to be able to share something from this talented musician... and maybe some of you will rush out and buy a recording if any are still available.)

Hello Pat,
I am looking forward to your arrival with a broom... I will prepare a flat area for you to land on safely, or do you prefer to slide down chimneys like Father Christmas?! Glad you enjoyed the video, pots and the crystals. I still get a childlike delight out of some of the crystals that form.

What a wonderful transformation the reduction firing made: from something good to something SUPERB!
Well done both of you!
Clever you - the way you've fitted Donovan's music to the slideshow is SOooo nice!
Let's hope th ODT reviewer also takes a child-like delight in what you and Manu have achieved, and oozes enthusiasm all over Thursday's Arts page.

Hello Dad,
Nice to hear from you. The reduction firing was a risk, as the first stage of the pot looked nice, but I thought it was a risk taking having seen the transformation of a tester that I did in an earlier firing. Glad you liked Donovan, I was most taken with the way that he sang that song.

Nice video Peter, quite psychedelic, I reminds me the peace and love generation !!!
Happy to see you at your exhibition, with Manu Berry.
The pink vase is lovely, did you expect this pink ? I really love this shape. The one with "bird's egg" is amazing. Take a look to your mail-box.
Wish you good sales :-)
Salut à Laura, Ginger and NS

What a great show Peter, the refires look great. as I am looking at the pieces I am seeing stars and other galaxies in the surfaces, great work.

Hi Armelle,
I was amused by your "peace and love generation", because I did try out the video with other music when I was putting it together, including Donovan singing "Mellow Yellow"... now that one really did sound psychedelic!

The pink vase was a colour that I hoped for. I had done one small test in an earlier firing which came out that colour, and I was very pleased to have been able to have achieved that colour again.

Hi Linda,
That's nice! I know what you mean about the "stars and other galaxies". I like to look at the colours and shapes of the crystals and to dream a little.

Hi Peter
I see you are having fun, it all looks so very good and as if you are going somewhere, I am going to be in Nelson next week and wonder if you have some of your work there and where do I find it.
I have been playing with a new set of pattens in wood but the learning curve is not smooth and now its just about time to put it aside till I return after my break away there may have to be some changes to the thinking,
Its good to see your blog keeps going strong.
Regards Bob

Really good to hear from you, I have been wondering how things are for you, and it is nice to be in touch.

Regarding Nelson, sadly I have not yet taken work there. It would seem like a very logical step to find a gallery in Nelson, as it has such a reputation for its pottery... maybe something I should aim to do soon..., especially as earthquake shaken Christchurch seems to be rather out of loop now as far as showing work goes.

The blog is still ticking over... I was thinking that I need to make it more interesting though. I have recently taken a few photos out and about, and I think that they will make a nice change for people!

Hope you have a good break in Nelson, and you are able to return to Auckland full of ideas and enthusiasm.