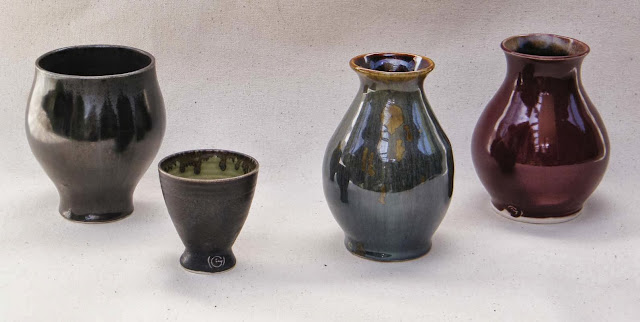 Last week really felt like some progress had been made as I managed to do a glaze firing of the electric kiln. I have recently switched to using porcelain for making most of my pots, and glazes often perform differently when applied to different clays, so the pots in the kiln were glaze testers, to see how the glazes would perform on the new clay. I glazed several pots with crystalline glazes that I was familiar with, and also revisited a crystalline glaze recipe that I had used a couple of years ago, and adjusted it to suite the higher temperature that I would be firing to. In addition to the crystalline glazes, I had a new matt black glaze to test, a dolomite matt glaze, and a chrome-tin red glaze. Of those last three, I was particularly interested in the chrome-tin red.

The firing yielded a number of surprises. One was that the "reliable" crystalline glaze recipes that I had used with success in previous firings on a different clay, really did not work as expected on the porcelain. 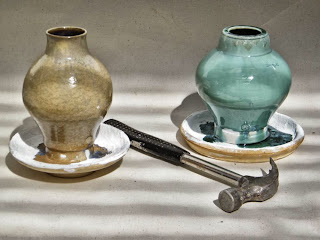 In one case, the glaze looked under fired, and the other appeared over fired.. and both from the same kiln! Some porcelains can leach out alumina into crystalline glazes, and inhibit crystal growth, but it is interesting in this case that one vase has too many small crystals, and the other has almost no crystals at all! I will have to try firing the "over fired" recipe to a lower peak temperature next time I try it, and will have to adjust the "under fired" recipe to add a little more flux. In glazing, the things that don't work out first time are often the best teachers, and it will be interesting taking the glazes through a series of tests and adjustments until I get them to work. The hammer in the photograph might be used.., but I will give these two vases another chance to redeem themselves by firing them again. Sometimes crystalline glazes do respond well to a second glaze firing.


Of the other glazes, the black was more of a manganese brown, but I expected this as it only had red iron oxide and manganese for colour, with only a small dash of cobalt to take the brown closer to black. The surface was really nice, almost matt with some areas a dull satin. This glaze reminded me of the manganese matt glazes of Lucie Rie and Hans Coper, and even did "Lucie Rie Runs" when flowing over a green liner glaze. 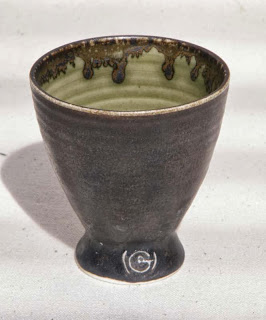 I am very pleased with the chrome-tin red. Repeated searching of the Internet for chrome-tin reds for cone 9 - 10 failed to produce any results, other than the discouraging advice that such glazes are likely to be unsuccessful above cone 6 due to the chromium oxide becoming volatile at higher temperatures.

Some time ago I had good success at cone 6 with a cone 6 chrome-tin pink that I found on June Perry's site, Shambhala Pottery. As an experiment I fired this at cone 9. It still gave me pink, but it was patchy, staying pink only where thick, and clear where it was thinner.

I did a series of firings where I played with several glaze bases, and fairly major reformulations of June Perry's pink. Mostly, I got off whites with a hint of pink. Or pale green and pink speckles. After about 5 firings of tests of various formulations, I had success with a lovely test tile that had a muted red with pale green where it was thin. About then I had to discontinue the testing as I injured my back, but now that I am returning to my potting I made up a larger quantity of this glaze and I tried it on a small vase.


I am very pleased with the result. It really is a good red that looks very like a copper reduction red. It really proves that chrome-tin reds are possible at cone 9-10, and I am delighted with this, as red can be such a difficult colour in the electric kiln unless cadmium inclusion stains are resorted to.... and who wants a factory made glaze, when you can make your own!!!

It is likely that I will make further adjustments to this recipe as I use it, but it is looking really good with this first test on a vase.

The cone 8-10 Matt Black recipe was from a very old Ceramics Review and I am not sure of the originator,


The crystalline glaze recipe that I used a couple of years ago, and adjusted to suit a higher temperature, was really lovely. Whilst it failed to grow many large or even medium sized crystals, the glaze had great complexity and a beautiful depth of colour, and I certainly want to use it again. This is an interesting glaze as it does not use glaze fritts, but makes use of "regular" potter's materials, such as Potash Feldspar, and Dolomite. Many crystalline glazers these days use recipes that are mostly an alkaline glaze fritt, plus extra silica and a large quantity of zinc oxide. Crystalline glazes made with fritts can certainly make superb crystals, but I find myself longing for some of the unique qualities that are to be found in crystalline glazes made with materials that still sound like something nature intended!

The successful crystalline glaze was a slightly modified version of a glaze by Swedish Potter, Lasse Östman.
I fired this to cone 9 well down 10 slightly bending. I did a 3 hour hold at 1110 Celcius (2030 F). 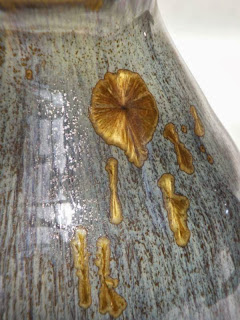 Note that this glaze contains Barium and Lithium which are poisonous, and should be handled with great care. This glaze is decorative and not suitable for domestic ware.

Cones and Fritts.
Note that cone 9 is about 1255 - 1260 Celcius (2291 - 2300 F) in my kiln. Cones record heat work as well as temperature, so the speed of firing does have a significant influence on the temperature that a cone goes down.

Glaze Fritts can be very useful for glazes, particularly for glazes in the earthenware temperature range. Materials that might difficult or impossible to use in their pure state, such as sodium or potassium, can be combined with silica and other good things, and heated up in a crucible and made into a glass. This molten glass is poured into water, where it shatters into small pieces. The shattered pieces are ground into a powder. This powder is then used as a glaze ingredient.
Posted by Peter at 9:55 PM

Please don't use that hammer. I think they look great now but hope you give them another chance.
I must have missed that you are using an electric kiln now but can see that the wood fired one would be a real problem with a bad back. Soooo happy you are working again.

Dear Patti,
I will stay the executioners hand and give the miscreants another chance to redeem themselves!! Hope to get the wood fired kiln puffing merrily again in the next month or two with the help of the other Peter Potter if he is still around.
Pxx

it is just wonderful to see you working again.

Hi Meredith,
Yup, I am thrilled to be chasing the spiders away from the kiln again. I think they had decided that it was a nice well insulated home for the winter... now they know that its central heating is rather excessive in output!!!

The test pots are looking good.
I especially like the red tin glaze. Its stunning! That would have to be a keeper.
How did the stall go on Sunday?

look at the gold, cool

Hello Sue,
Red glaze is most encouraging. It was a good day at Glenfalloch, lovely surroundings and sunny weather. R & M both sold some work which was really encouraging for them, and I covered my costs with enough over for cat food for Nigella Stopit and lunch for us too!

Hi Linda,
Really pleased with the gold coloured crystals, they are really pretty. I'll see if that will happen again next time I fire.

Yes it looks very different from your previous crystalline glazes, and your chrome tin is very nice, I like the golden crystal too, bravo !!!

Bonjour Armelle,
Good to hear from you, thank you for your encouragement! I hope to start glazing more pots today. :)

I had a go at your chrome red over stoneware and porcelain tiles. Overall, I am pleased with the result, however the glaze is a bit speckled with tiny clear dots. A couple of reasons came to my mind : 1/ the glaze may be too thin, 2/ I didn't sieve it, 3/ maybe the whiting has provoked some bubbling (I will do another test with wollastonite instead). Anything else you can think of ?
Here is a "link" to a picture of the output : https://flic.kr/p/24g9n3D

Anyway, thanks to share your recipes, several are working perfectly in my electric kiln !

Hi Jean-Pierre,
Really nice to hear from you, and I enjoyed following the link and seeing your photos of pottery and of Budapest.

I am glad you are having some success with the glaze recipes, and that the chrome red one is almost working for you. It is a very useful glaze for the electric kiln and it gives a nice alternative to using commercial stains in order to get red.

I take care to sieve this glaze at least twice through an 80 mesh sieve, there is so little chromium oxide in it that I make sure that it is well dispersed through the glaze. I think the speckles that you have are most likely due to not sieving fine enough.

Regarding glaze thickness, I think you have it OK from what I can see in your photo. If the glaze is too thin it generally goes clear, or even slightly green (which is interesting!). It is nice to try the glaze applied thickly inside a bowl, you can sometimes get a bit of purple that way!

I have used the glaze many times but have never had trouble with bubbling from the whiting (although I have experienced this with one or two other glazes).

It is interesting to try this glaze over a coloured slip. If over green slip it can look quite similar to a reduction fired copper red glaze!

Hope you can get the speckling thing sorted. Do let me know how you get on.

I am very happy with my last test of your Chrome/tin red.
I sieved it through 100 mesh, and also added a little soaking at 1000°C.
Look at the photo (over porcelain) : https://flic.kr/p/22ULKAq
I will try with a green slip under to see what happens !

Thanks a lot again for sharing ....
Jean-Pierre

I am really delighted that you have had success with the Chrome/tin red, and your porcelain bowl with the glaze looks lovely :-)

Thank you so much for letting me know of your progress with this, it is very nice to think of the glaze having life and purpose in other parts of the world!

I am glad that you will try a green slip under the glaze, it is really interesting to play with such combinations. Also do try the addition of small amounts of cobalt carbonate to the glaze there are some very useful purples to be discovered that way.