All Through The Night!

Here I am again, firing another crystalline glaze firing and writing the blog! It is 7.25 in the morning, the kiln is passing through 1100 Celsius (2012F), and the sun is out of bed doing its best to break through some silvery cloud. I have been up checking the kiln at roughly 2 hour intervals in the night, so Nigella Stopit, whose custom it is to sleep cuddled up against my legs, will be tired today. The good thing about being a cat, is that you can generally catch up on sleep when you feel like it..., the rest of us have to do without!

I must remember to get the telescope out of hibernation and have a look at the night sky soon. There was a particularly bright planet on view when I was outside walking the short distance to my kiln shed, and it would be nice to have a better look at it. I suspect it may have been Jupiter?? We did have a bit of a thrill a few years back, when we saw Jupiter's moons for the first time through a telescope.

The Red Planet?? Well, not really, this is one of the spy holes in my electric kiln when the temperature inside was about 700 Celsius (1292F). In theory it should be possible to start to become aware of a red glow in a kiln when it is about 550 Celsius or so (1022F), or maybe slightly sooner, but this can be very hard to see. I like to make a mental note of the colour of the glow in the kiln and the temperature at the time, you never know when such things might prove useful, even with an electric kiln.

There are still some potters who fire "by eye" and don't use modern gadgets at all, but these would mostly be doing stoneware temperature wood firings, sometimes over several days, or raku firings, where accurate control of temperature may not always be the most important thing. With raku, it is more about firing until the glaze looks shiny. In this case, the maturity of the glaze is far more important than if it happens at 850 degrees, or 950! There is a rather nice account, in an old Ceramics Monthly magazine, of a group of American potters visiting a traditional pottery in China. There, through an interpreter, and old man firing a kiln was asked what temperature he fired to. He evidently looked puzzled as if this had little relevance, and said, "until the glaze goes shiny". He was asked how long he fired for, and again answered, "until the glaze goes shiny".

Unfortunately, crystalline glazing calls for accuracy of time and temperature, and even 5 degrees over or under a target temperature can make a lot of difference. It would be very useful to be able to watch what was happening to the glaze and the crystals throughout the firing, then I could fire "until the glaze goes shiny"! Some potters have experimented with taking photos of crystalline glazes as the crystals are forming. Unfortunately this is not a simple process, and needs special equipment. The pots are at such a high temperature that they are very hard to see at all, even through welding goggles. Everything glows like the surface of the sun!


I am still working on some blue crystalline glazes. Last firing I managed to get most of the pots to produce crystals (which was a great improvement on the firing before), but I still have to fine tune the peak temperature that I am firing to, and the amount of time the kiln remains there. The time spent at the peak temperature is an important influence on how many crystals grow on the pot. I want to achieve a nice visual balance between crystals and the glaze that surrounds them. Some of the pots came close to success in this firing, but only one was saleable.

One problem that I ran into with several of these pots was uneven distribution of crystals. I had initially applied the glaze by pouring. This had resulted in some areas of glaze that were double thickness, the sort of thing that can give nice colour variations on a stoneware pot, but in this case the variations in thickness caused areas that were oversupplied with crystals, in a way that was ugly, rather than something to celebrate! I think that holding the kiln for slightly longer at peak temperature would have helped the glaze even out somewhat and made this less of a problem, but I will have to be more careful with glaze application in future.

I will try re-firing the pots that did not work out in the previous firing. Sometimes this can produce wonderful results. I have put the tall blue vase, that is in the photo above, in the kiln again, and we will see what happens to it a second time around!

To give you some idea of what the pots look like before they go into the kiln, here is a photo of the pots that I was getting ready for the firing that I am doing at the moment. The glazes are mostly a powdery grey colour at this stage. The smallest pot, on the right of the photo, is the only pot to not have a blue glaze. This one should be a warm honey-brown colour. 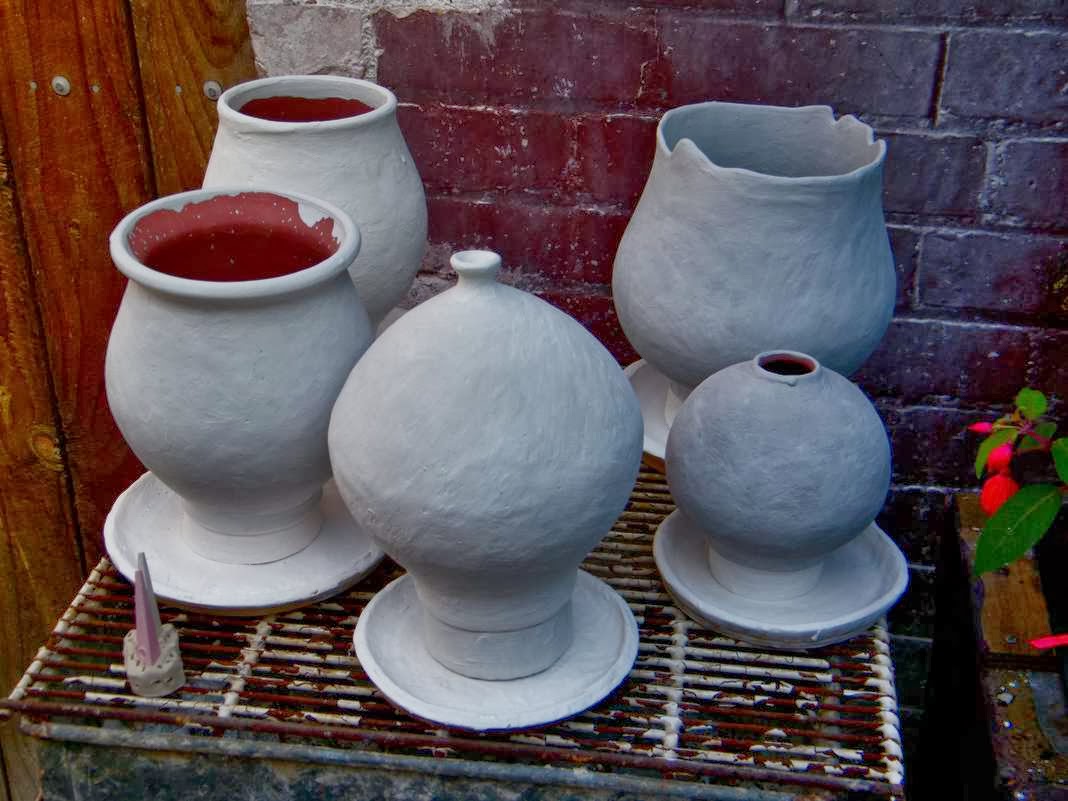 You will see that the pots on the left of the photo have a rusty red coloured glaze inside them, this should be a very dark brown, almost black, when we see them again after the firing.

The glaze has to be applied very thickly for crystalline glazing. Lots of it will run off the pot when the firing is at its hottest, and there is a glaze catching saucer under each pot. I have applied the glaze by pouring a layer over the pot, then brushing glaze on top of that. The glaze will be about 3 mm thick in the top third of the pot, and about 1 mm thick near the bottom, this should even out when the pot is fired.

Well, must go and check the kiln again. It is now 11.30 in the morning, and I am mid way through growing the crystals.
Posted by Peter at 11:31 AM

Wow- beautiful pots. So, I wasn't aware that the glaze needed to be applied that thick. Why? Am guessing some break when trying to remove them from the holder on the bottom or whatever it's called.
No flowers here- only snow! It was 46 degrees F in my garage- which has my small studio, so I finally put layers on and went out there. Luckily, I had a space heater. Hope you get some sleep soon!

Hi Amy,
Lovely to hear from you. It is an interesting question about crystalline glazes needing to be thick. There does seem to be an ideal thickness where crystals grow really well. If the glaze is too thin, then hundreds of small crystals tend to grow all bunched together. The crystals also tend to look "dry" and feel rough. If the glaze is too thick, sometimes crystals don't seem to grow at all. Crystals often need to be "irritated" by something in order to get started. The roughness of the surface of the pot, may be of greater than usual influence in a thin glaze, and I suspect that this might have something to do with the large number of crystals that can develop where a glaze is too thin. It could be that a thick crystalline glaze is not "irritated" enough by the surface of the pot, and this may result in few if any crystals making a start. These are just my thoughts based on what I see, there might be a better scientific explanation.

Another good reason for starting with a thick glaze, is because the crystalline glazes are mostly very runny. Some of the glaze will almost certainly run off the pot in the course of the firing, so you need to start with extra to allow for this.

I have not lost many pots through breaking them when removing them from their glaze catcher, but it does happen. I always feel a little tense when freeing the pot. I carefully tap around the join with a hammer and chisel, some potters use a fine gas flame.

Brrrrr, 46 degrees F sounds really chilly! Layers help! Winters were bad here about 20 years ago, and my studio was only just above freezing. I could only work for half an hour at a time before having to stop and have a hot drink in front of the kitchen fire. In those days I had to wear 3 pairs of trousers, two jerseys, and so on!

I managed an hour or so of sleep this afternoon!

Clay seems to make us gluttons for punishment doesn't it; you must have so much patience for those crystal pots, we are still cold and rainy, just on the border of having more snow but not quite, ready for Spring weather.

Wishing you a successful firing. I love the comment "until the glaze goes shiny" comment from the Chinese potter!
I enjoy reading about and seeing your process, since I know very little about crystalline glazes.

Hi Linda,
Amazing snow photos on some of the potter's blogs recently, it looks like you have had quite a cold winter this year. Never sure if it is a question of patience with me and crystal pots, desperation, or some sort of addictive disorder.... Maybe crystalline pots are like cats..., they don't do things to order!

Hi Michèle,
I enjoyed the "until the glaze goes shiny" too, it is firing theory pared down to its essentials! Sometimes potting becomes so technical and complicated, and it is refreshing to take a fresh and simple look at it! I'll be unpacking the kiln, that I fired yesterday as I wrote the blog, in an hour or two..... Only about 6 pots in the little kiln, I really hope something has turned out as it should!

Your unsuccessful glazes or firings look fine to me and my untrained eye. In fact they look quite spectacular.
I admire your dedication and perseverance. Well done, and hope it behaves on the second firing.
Sue

Hello Sue,
Lovely to hear from you. The unsuccessful glazes were showing their best side to the camera! Happy to report that the tall vase that I re-fired came out beautifully today. Px

Peter, the new work is very exciting and strong colours. I do believe you are a clever chap.The crawled white glaze is most unusual. Like very much.Be interesting to see more glazes ,crawling. Rhonda.

What a gorgeous BLUE! And, oh what time and effort goes into achieving it. Well done, Peter.

Good Morning Rhonda and Pat,
I am writing this with chilly toes, the first signs of daylight outside, and a cup of coffee to wake me up!
Lovely to hear from you both, thank you for the encouragement. I will investigate crawling glazes further, and more blue!

Lovely pots Peter, sorry to have been away, these past days, I had a lot of emotions.

Hi Armelle,
Thank you for your comment, it is good to hear from you. I'm sorry that you are having a difficult time at the moment. Kind thoughts to you from us all, P