Thursday 16th October was a busy day for us. Two of the pots that were at the exhibition opening at Koru Gallery that evening were unloaded from the kiln first thing in the morning. I don't like cutting things as fine as that, but I also was having to produce pots for a local craft show in Palmerston that I had to deliver on Friday, and I am already producing work for another exhibition, so was under a lot of pressure.

We met up with Rhonda and Mark at Koru Gallery in the early afternoon and set up the exhibition. The opening was for 5.30 in the evening, and it was a happy one, and we do appreciate our friends who faithfully turn out to these events. Openings are always a bit stressful for the artists who are showing their work, and a few familiar faces and encouraging smiles help a lot to bolster the self esteem!

Sadly, none of us managed to take photos of the opening. I think we were all too busy!
Rhonda and Mark made a brave attempt to take photos in the gallery the next day, but it was difficult in the limited light.

Here are some photos of some of the work that we have at the exhibition. Some are photos that I took in the studio before the exhibition, and there are a few that Rhonda and Mark supplied that they took in the gallery.

The "flowing glazes" are really crystalline glazes used over a tenmoko glaze. I like the extreme fluidity of crystalline glazes, and sometimes make use of them just for the way they can madly run and transform a more conventional glaze when applied over it.


This green glaze has lovely tiny secondary crystals packed in around the large primary ones. I coloured the glaze with copper, iron, and manganese, but I have no idea of how much of each! I had several bottles of crystalline glaze with the same base recipe, but coloured with different oxides. I combined them intuitively like a chef!

This reduction fired crystalline glazed vase, and the one that follows it, were the two pots that were unloaded from the kiln on the day of the exhibition. I was delighted with both of them.

Here is a selection of paintings that Laura did for the exhibition. People often ask "What are Laura's paintings about..?" But she hardly ever talks about them or attempts to explain them!  They are what they are! I suspect that the paintings the paintings have a lot in common with dreaming, and they have many layers of meaning.


Here is a little section of photos that Rhonda and Mark kindly supplied. The light was difficult, but they do give an impression of the gallery and its location. The garments are all by Rhonda, and the clocks are by Mark. 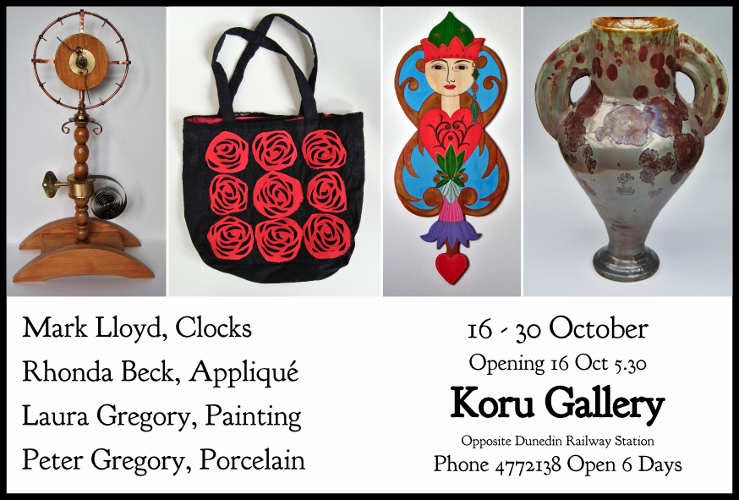 What beautiful work Peter. That first one is particularly stunning. Definitely an heirloom piece for some lucky soul.
Love Laura's Life is a circus and the Dahlia. Both of you are so talented. Hope you sold lots.

Hi Patti,
Lovely to hear from you. It was nice that you could see some of the exhibition all the way from Arkansas! Thank you for the encouraging words, always much appreciated by us both.
Sales have started and hope that more eventuate through the course of the exhibition!
Kind Thoughts,
P & L

Brilliant! Surely the best small-scale exhibition we've viewed, from afar unfortunately, to judge from Peter's blog with Mark and Rhonda's photos complementing his.
Peter's latest porcelain is superb, as are Laura's intriguing paintings.
Both Mark's clocks and Rhonda's clothes make a nicely wrought complement to their work, and it's no wonder to us that the Gallery owner is so pleased.
Peter has two very delighted parents!

Thank you "Anonymous"! It is nice to have a proud Dad and Mum! :)

You look so happy, you are of course, beautiful pots and crystalline glazes, and I really love Laura's paintings. It's so nice to exhibit with your best friends, Rhonda's creations are so nice , and Mark's one too.

What a lovely exhibition !!! I send you both all my best wishes for success.

Mark and Rhonda's photo are great !!!

Well I have to leave you, we have a film about Churchill to see right now !!!

Good to hear from you. I have been here on my Island in the Pacific only a few hours ago watching a documentary about early WW2 German Jet aircraft..., and there you are on your beautiful Island in the Atlantic watching a film about Churchill!

It has been nice exhibiting with friends, and we have had a few sales at the exhibition, but hope for some more!! The good thing is that we have each sold something, which is good for democracy!

Love those crystalline glazes!
Congrats to you both for a wonderful show.

Hi Michèle,
Good to hear from you, thank you for the encouragement. Am in a mad rush now making work for another exhibition with a deadline in about 10 days.... Agggggh!

What a great show, I am slipping up I missed this post, wonderful to see your's and Laura's work wish I was nearby to see in person.

Good to hear from you, don't worry about "slipping up" it is always lovely to hear from you when ever you are passing by on the blogisphere! I have been so busy lately that I am rarely out and about myself!
Kind Thoughts,
P