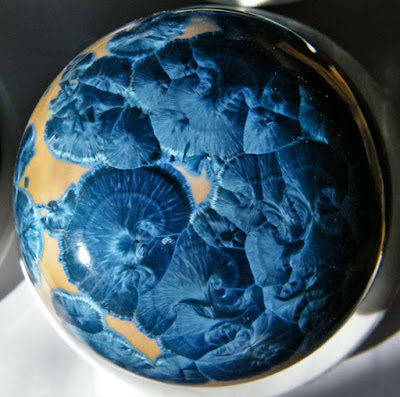 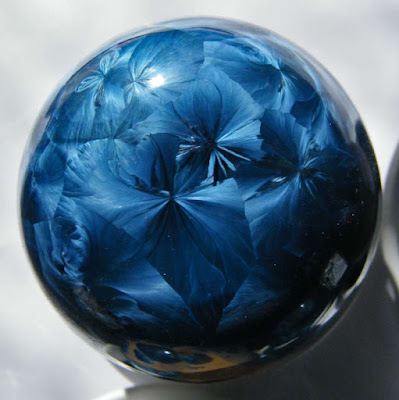 I opened the kiln a couple of days ago and was delighted to see these glaze tests smiling back at me! It was especially good to see them as almost nothing else had worked as it should in that firing, so the little tests were needed to give me the encouragement to keep going!

These are tests of crystalline glazes with a little Nickel oxide added to colour them. Nickel can behave in a very interesting way in crystalline glazes in that it can give two colours from the one metal. The crystals are likely to be blue, and the surrounding glaze could be yellow, orange, or green!

The two glaze tests on the left of this photo were the same glaze recipe fired at different temperature. It is amazing to see the transformation that a mere 55 Celsius (131 F) has made! The first test (from an earlier firing) was fired at cone 7 (approximately 1230 Celsius (2246 F)) this has given a satin matt glaze; the second test was fired at cone 10 (approximately 1285 Celsius (2345 F)), and has dramatically changed to a shiny glaze with large crystals.

Your crystal tests are other-worldly!
You make it sound so simple and I no for a fact it isn't!
More please!

Now that WAS worth the work!

Wow, you are a master. Just beautiful.

Beautiful. Satellite image of the earth?

Heard the saying, "Fickle Nickle" :) those are wonderful results... I'm still learning the varies of my own kiln and don't have to courage yet to try crystalline. Yours are terrific and generous of you to show the glaze recipes too.

those are very cool!

Dear All,
Thank you so much for your encouraging comments. All a busy whirl here, with one stoneware firing through the night finishing 9.30am today, instead of around 5.30am due to kiln problems. Now firing a crystalline glaze firing with the other electric kiln that is due to finish around midnight. Exhibition deadline is looming very close!! Must go and check the kiln, I'm currently busy putting growth rings into crystals by doing controlled dips in temperature. Best Wishes, P

Absolutely stunning results. One looks almost like carved lapis lazuli, the other like a planet! I love it!

Thank you Jordan for the enthusiastic comment, it is good to hear from you. Another crystalline glaze firing happening as I write, hopefully have some green crystals in this firing...

Hello Peter
Have you tried bentonite instead of clay in crystalline glazes and I found that firing the Janet de Boos to cone 9 gave good results raw glazed and fired with used vegetable oil heated in old hotwater tank and would love to send picture but how to attach pictures
Kees from yatteyattahpottery@gmail.com

Hi Kees,
Thank you for your comment, it is good to hear from you. I often use 1 or 2 percent bentonite with crystalline glazes to make them less difficult to apply, and to help them behave better in the glaze bucket! Generally I use little or no other clay. I would love to see your results, and am impressed that you are firing with vegetable oil, I have emailed you directly so that you can reply with photos.

Looking forward to seeing your work,

Wow! this is really cool glaze man! really love the cristal shape and the size of it, i have never seen such large cristals in one glaze! deffenitly going to try this glaze..

i wish you all the luck developing glazing and making more ceramics!

Greetings from the Netherlands and the best of luck!

Hi Rick,
Thank you for your comment, it is nice to hear from you. I do hope you give crystalline glazes a try. The Janet DeBoos Recipe (number 84 in her second book of glazes) is probably one of the easiest ones to try, and you are quite likely to get good crystals forming if you fire to Orton Cone 9 or 10. The crystals will be better still if you slow cool the kiln, holding it at about 1100 Celsius for 2 - 3 hours (or more!) as it is cooling should help the crystals grow larger.

Do remember to protect your kiln shelves when firing crystalline glazes, because the glazes are very runny when they are at high temperature! You could try a test on an inside of a small bowl to start with.

Hello Peter,I'm interested to know if you were able to achieve a non runny result with DeBoos No.84. Some years ago I put a test into the kiln at our Art Centre in Perth in Western Australia & it was gorgeous.However it was only achieved via a big power failure in the area.When I tried it in my home kiln it was a dismal failure- no crystals. Ofcourse I hadn't altered the program to slow cool & I haven't had the courage to try again.(The test didn't run).Carole

Hi Carole,
Compared to most crystalline glaze recipes the DeBoos Number 84 is very well behaved in that it has some clay content and thus there is a little more alumina then the more difficult ones. The alumina will "tame" the tendency to run excessively, but the glaze will still move so you will have to allow for this when you glaze a piece, and you will need to ensure that you protect the kiln shelf from any glaze runs. Crystalline glazes really do have to be low in alumina and quite fluid for large crystals to develop. I would fire this glaze between cone 9 and cone 10 for good results.