As I write this I am babysitting the kiln, that has about another 2 hours to go with a crystalline glaze firing that started at 6am today. In all probability the effort of writing and having to jump up and visit the kiln every few minutes will fry my brain and my writing will dry up, but I will do my best!

We took some new work into the Stuart Street Potter's Co-operative in Dunedin yesterday. It was nice to catch up with a few of the potter's there, and to refresh my display. Each member of the Co-op has an area of shelves on which to display their things, and sometimes a few works are shown on plinths too. At regular intervals through the year, the potters swap the spaces around, so people get a chance to occupy other parts of the shop.

I took a few photos of my display with my smart phone, and was quite surprised to see that the phone did a good job for such a basic little camera.

The blue dots that you see on my work is not some sort of disease, but it is just little pricing labels... In some respects I dislike having to put them so prominently, but it does make it easier for public to see how much things are, without having to do a lot of rummaging around..., which is somewhat risky with pottery! 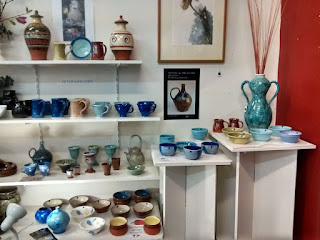 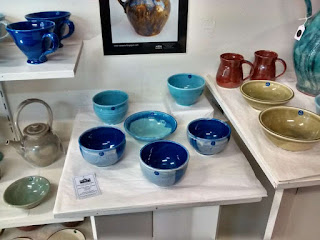 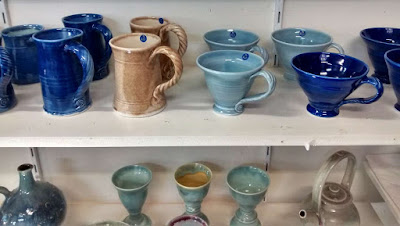 The tankard shaped mugs, and the cups near to them are both new designs for me, and I am particularly pleased with the "twisty" looking handles. The handles were made by forming a gently tapered thin sausage of clay, maybe 5 or 6 inches long, then carefully rolling it at a diagonal across the texture of some corrugated cardboard. After that I smoothed one side of the clay by throwing it down hard on my work table. Then I bent the clay around in a handle shape, and left it to stiffen for a few minutes before attaching it to the mug or cup. When bending the clay into a handle shape, I found it important to gently push the clay together and bend it at the same time, this helped prevent it cracking. I have never made handles this way before for my cups and mugs, but recently tried this when my pupil, Becky, was out here for a lesson and needed to turn a cylinder into a mug. I liked the way the handle looked so much that it appeared in my own work the next week!

I have an exhibition coming up next month in the Selwyn Gallery, Darfield (near Christchurch, NZ), so it is "Action Stations" here at the moment, and both my electric kilns are helping Just Energy turn a handsome profit this year! The exhibition runs from 6 November to 4 December and I share the gallery space with Christchurch Artist, Judy Rogers, who works with fabrics.

I thought you might like to see how pots are glaze fired in my little kiln when I am doing crystalline glazed firings, and I took some photos looking in the kiln before and after the firing. 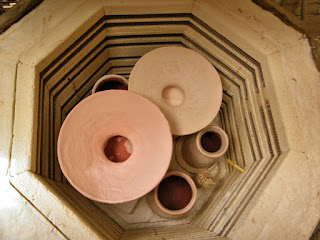 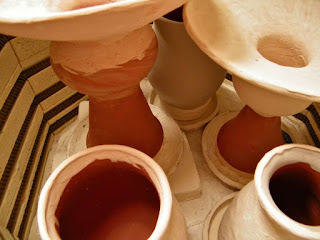 This is the smaller of the two electric kilns that I have here, I think it is a shade over 3 cubic feet in capacity. It can take me a long time to pack a small kiln like this, as fitting overlapping shapes is really like trying to solve a three dimensional puzzle. I sometimes stand the bowls on insulating fire bricks to lift work high enough to squeeze in near something else. To make things worse when packing the kiln, crystalline glazed pots have really runny glazes, so each pot has to have a glaze catching bowl made for it, and stands in the bowl on a specially made porcelain ring. 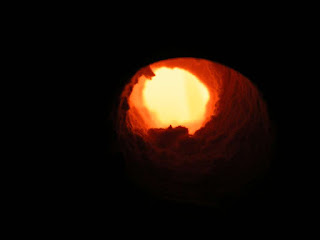 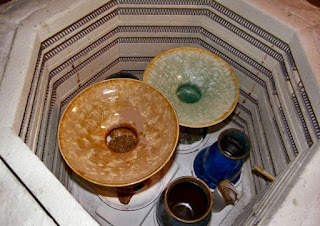 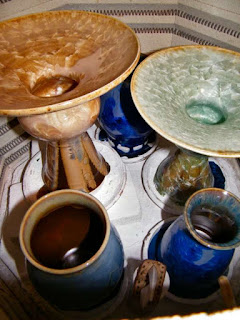 And here is after the firing, it is fun to see the change in colour. I fired this one slightly too low. With crystalline glaze firings the number of crystals that you get to form is strongly influenced by the temperature that you fire the kiln to. If you are slightly too low in temperature, then you usually end up with too many crystals forming, or slightly rough or "dry" areas on the glaze where it is thick. The smaller pots in this firing were all under fired, so other pots were loaded in with them, and they were fired again, whilst pots that were destined to become part of my Potter's Co-op display, warmed on top of the kiln. 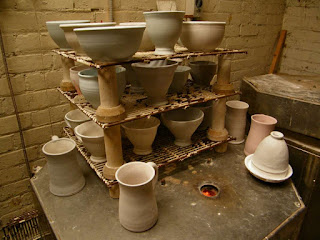 And here is the result of the next crystalline glaze firing. Much better this time. 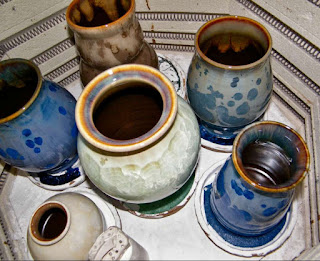 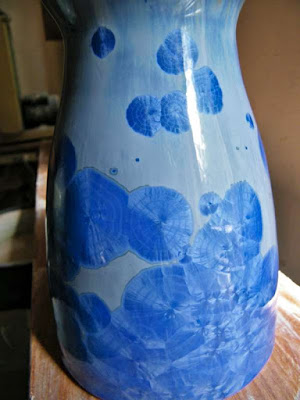 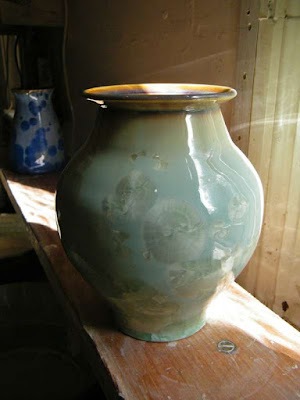 Well, I have another hour or so to go on the firing that I am doing as I write. I had better put on something for a meal as well so will send this post off into the "ether"...(as they used to say before cyberspace was invented!).
Posted by Peter at 6:55 PM

A very nice looking days work Peter, I expect it is more than a days work that you are showing and between us we have done wonders for our country and mankind.
There must be something about spring that gets us going and producing all these wonders, yours has much nicer shapes than mine but I will find flat a joy to behold.
Keep up the good work the shop display brings back good memories.

oh such beauties, love the kiln shots of the before and after, and love those big pots with the flat tops perfect to show off the crystals

Busy, busy times! You are, as usual, getting some wonderful results.
I always love seeing before and after photos of kilns.
Happy Spring/Summer!

Hope the firing came out good.
a tip for rolled twisty handles...ribbed wooden butter pats.....cardboard gets damp from the clay....

I used corrugated cardboard to created textured handles for many years. Eventually I got texture boards sold by U.S. potter Bill Van Gilder. I sometimes wish I had a couple that were a little larger.
Like others commented... I love the before and after kiln photos. Your pots are looking great!

Smart putting the price on the sides. A lot of folks put them on the bottom making it necessary to lift the piece and turn it over. Dangerous but I guess if you have a "you break it, you buy it", policy bottom pricing may be an advantage.
Enjoyed looking at the finished work inside the kiln and realizing how you must mix and match.

When you refire the pots with heavy crystal formation, do the metals go back in the melt and then recrystalize out? I should think once they form they might be difficult to change.

Good to hear from you Bob,
You are right about "more than a day's work", my working day seems to stretch seamlessly into every waking and sleeping moment, what with kilns firing and so on, but it is nice to have something tangible to show for it every so often, something that occupies space as well as thought!

Hi Linda, thank you for the encouragement. It is interesting to think of the shapes that do work with crystalline glazes. It is an ongoing challenge to find something that isn't overwhelmed by all the glitter!

Hi Smartcat,
"Happy Spring/Summer", definitely... it has been wonderful having some warmer days, and more daylight to work in. Just seeing the cherry blossom and flowers in the garden is calming and encouraging when the exhibition deadline is looming close!

Hi Gwynneth, good tip regarding texture from butter pats.. I have one somewhere and must try it. The corrugated cardboard has been OK so far though as I have only done a dozen or so handles at one time.

Hi Michèle,
Bill Van Gilder, I've certainly admired his work in magazines and online... I wonder if the texture boards bring a little Van Guilder magic with them!!

Hi Patti,
It is a bit nerve wracking sitting in the shop sometimes and hearing customers rattling their way through some of the Co-op members work. Someone once made ceramic plant names that were on long bendy wire.. I guess that the the idea was you could push the wire into the ground and have a name to tell you what herbs you had planted...(great for if you were getting forgetful!).The things were displayed pushed into a lump of wood in the shop to display them, and were close enough to clatter together when anyone looked at them....

Hi Anonymous,
I think that the crystalline structures must break down when the glaze is refired, and any metals that have been part of those structures must go back into the melt, however, interesting things have happened in the first glaze firing. I always note how the crystals tend to gather up some metals, for instance, if you have iron and cobalt oxides in a glaze, you can be sure that the cobalt will find its way into the crystals, and the iron will occupy the area surrounding them. This must make a difference to how things behave when the glaze is refired. Instead of starting with the glaze components evenly distributed over the pot, we start with a glaze that has little areas where metals are concentrated.

I have sometimes put a crystalline glazed pot in with a bisque firing, or an earthenware firing to get some idea as to when the crystals start to break down. I have certainly observed them to soften and start to lose their clarity at those temperatures.

What usually happens when the glazes are refired in the normal way for a crystalline glaze firing is that the crystals are small and numerous the second time around, this may be due to the fact that the glaze is now much thinner, and crystalline glazes tend towards growing numerous small crystals if thin, but I suspect that there may be other things influencing this too. We are starting with a zinc silicate this time, rather than making one out of zinc and silica as we did in the first firing.

All interesting to observe and ponder... but I am no chemist! :)

I haven't yet tried crystalline glazes but do admire them. Those twisty handles look great.

Hi Anna,
Good to hear from you. The first twisty handles I made took ages, and I almost went back to my usual pulled handles, but I am glad that I kept going as I really sped up once I had got the knack of it, and I like the way they add interest to the cups and mugs.

Fantastic results of your crystalline firing Peter. Sometimes you have to win and this time you did.