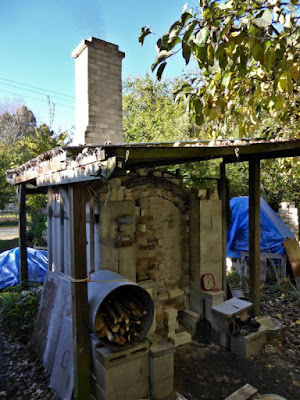 We managed to fire the wood fired kiln on Thursday this week, a 10 hour firing that finished about 20 minutes before winter arrived. 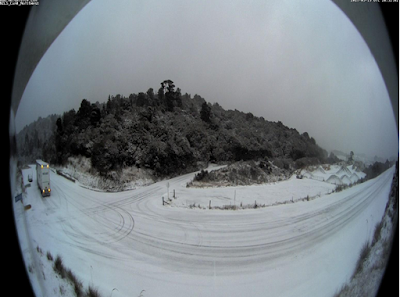 The road to Dunedin was closed due to snow for a few hours yesterday, and it was nice to walk outside in the chilly air to visit the cooling kiln and bask in the gentle heat radiating from its walls!

I hope to unload the kiln today.


This second firing of the wood fired kiln since the major interior rebuild and design was more controlled than the first, it had to be... because there were much larger pots and bowls on board than there were on the test firing. The kiln was loaded over a two day period. The loading took a little longer than anticipated, because I had the interesting job of sorting out how best to stack a mixture of large and small pots, and I changed my mind a couple of times! 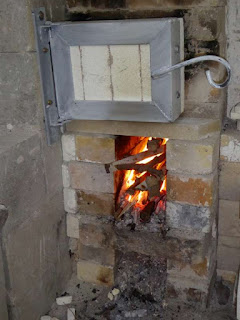 Our friend, Mark, kindly welded together a lovely door for the fire box, made from scrap angle iron and I fitted insulating fire brick to it, and managed to install it by torch light the evening before the firing. I then lit a small fire in the ash pit to pre warm the kiln.

The firing began the next morning in darkness at 6 am. The first 300 degrees or so is fired completely from the ash pit, with a small fire in there being progressively built up over the course of three hours or so. At about 350 degrees the first wood is put into the firebox, and this starts to take over as the main source of heat after 450 degrees is reached. From that point onwards, the fire in the ash pit is allowed to burn out, and is replaced by hot embers from the firebox above it. 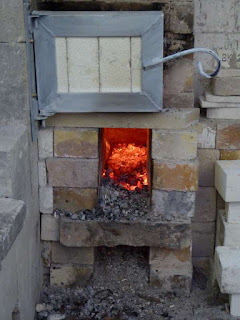 On the first firing the kiln climbed happily at about 400 degrees Celsius (752F) per hour until well over 1000 degrees (1832F), which was OK for a test, but I needed to fire a lot slower than that for this firing. I managed to average about 250 degrees (482) per hour from 400 to 1000 degrees, then slow to 150 (302F) degrees per hour to 1200 (2192F), and then spend one and a half hours or so above that temperature. The kiln will have reached 1300 (2372F) and I was able to hold for 45 minutes near peak temperature. I would have liked to have climbed slower than I did, but I was pleased that this firing was considerably more under control than the previous one, so things should improve with experience! 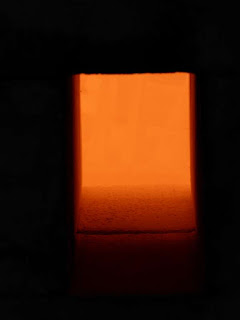 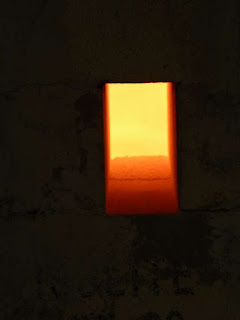 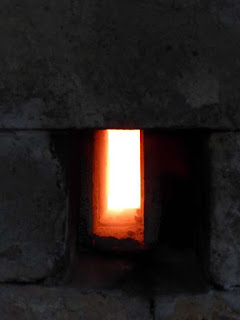 I fear that I may have over fired the pots at the top of the setting, but all will be revealed when the kiln is opened a few hours from now. The top of the kiln still fired hotter than the bottom, but I think the difference was about 2 cones on average, where as it was 3 cones on the test firing. I may not worry too much about trying to even things out more than that, as it gives me the chance to fire a range of stoneware glazes. I just have to be organised about making and glazing work for the hotter and cooler parts of the kiln.


I had better go and see if I can take some bricks out the door now to finish off cooling the kiln! 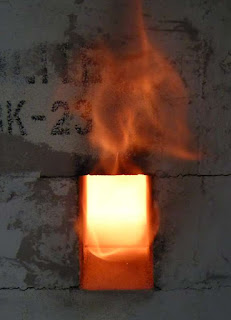 Hi Peter
a great explanation of your firing schedule.. it makes me wish I had a wood fire kiln to play with... any chance of the snowy conditions cooling the kiln too quickly?

Looking forward to the big reveal! Best of luck.

Hi, Good to hear from you both! Happy to report that the firing was best ever, and some lovely pots. I will post pictures soon.

Regards snowy conditions cooling the kiln too quickly, I don't think it a problem really as kiln coming down from 1300 degrees C has a huge reserve of heat to get rid of through well insulated walls and outside world temperature is very small in comparison!

Better insulation than my little electric kiln.. I'm looking forward to pics of your pots!