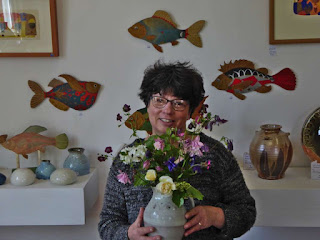 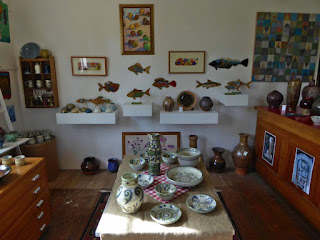 We were recently part of a local craft day and had our place open to the public with me demonstrating on the wheel, whilst Laura talked with people in our gallery. We had a busy few weeks getting work ready for the day, and Laura  painted some really lovely imaginary fish. Most of the fish were designed to hang on the wall, but I made little wooden stands for some of the others. 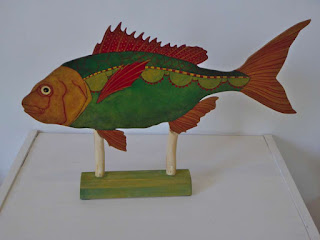 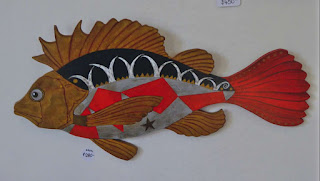 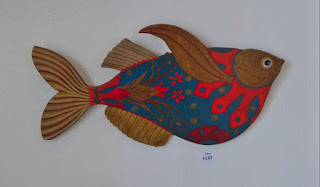 Sadly we may have only had 25 people through in total, so sales were a mug, a small bowl, and a card, which was a bit of a disappointment, but we are thankful to those who visited and we have got the place well stocked up for the summer season!

I had intended having some new porcelain paperweights for the open day, but only 2 of the 11 paper weights enjoyed their glaze firing... the remaining 9 were either under fired, over fired, or just plain stubborn and would not grow crystals! It was a complete contrast to the excellent firing I had the time before! 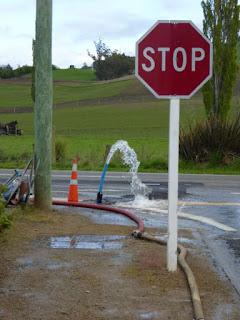 I contemplated trying to get another kiln of crystalline pots fired before the open day, but was too short of time... so had to do what the sign a the end of our street says...and Stop!

Instead I glazed a kiln load of 2 large, kiln filling pots and a medium sized one as I was desperate for new work to go to the Potter's Co-op for a window display that we were scheduled to have in the days running up to the open studio here. 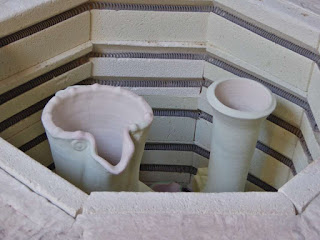 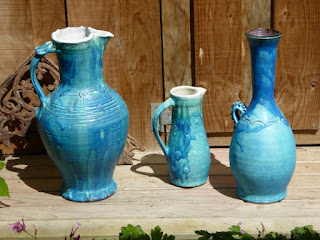 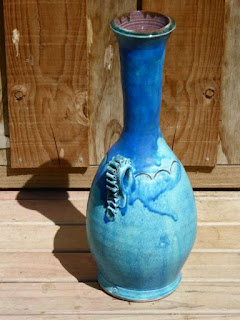 I used a Cone 3 glaze of my own, that I had tested on something small a few years before, but had never put on anything large. I was delighted by the result. The glaze is an alkaline copper blue and it was nice to see the colour variation where the glaze was thick or thin. 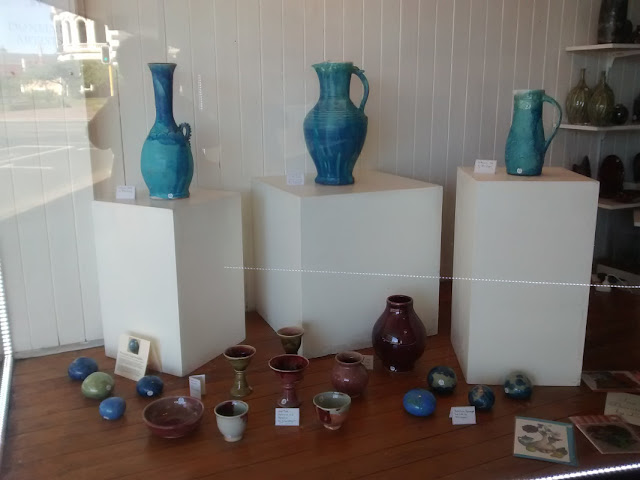 Laura snapped this photo of the Co-op window display on her phone. 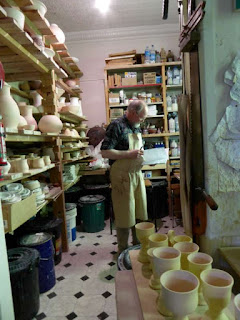 Once the Open Day was over with, I spent the next week glazing pots for a firing of my wood fired kiln. The studio soon fills up with pots in various states of glazing, and it is quite a art finding enough space to fit everything. 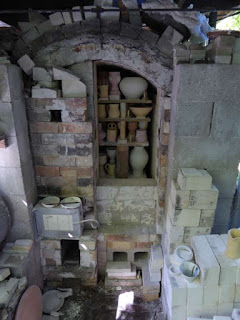 It is a relief to get the pots out of the studio, and the kiln loaded. 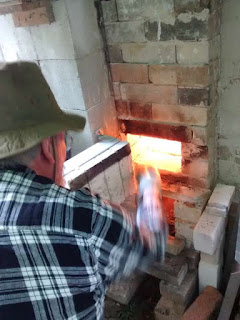 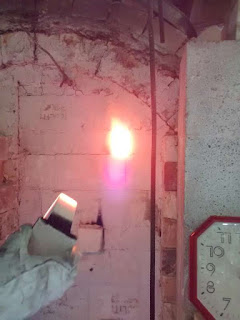 The kiln fired really well, but.... 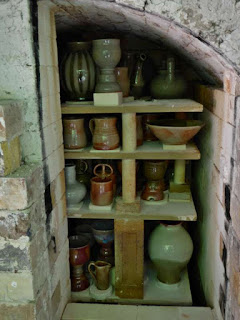 I would love to report a great firing, but it wasn't... I got things too hot! I over fired many of the pots due to a series of errors and a poor decision on my part, so I lost almost everything that was copper red, and some celadon pots were very unattractive.

In spite of all that, there were some gems! 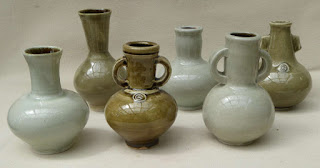 These small porcelain bottles are probably my favourite things from the firing. 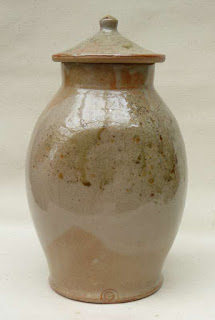 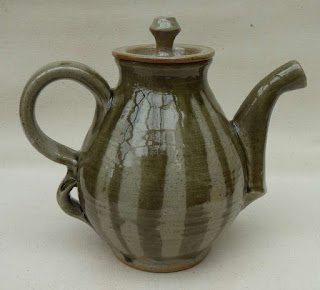 A 6 cup coffee pot (or teapot if you would rather!) 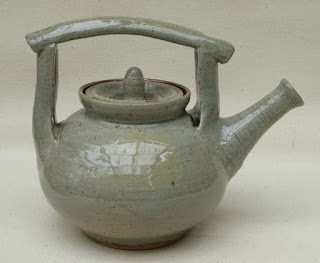 A tea pot. The handle was made up from three tubes that were thrown on the potter's wheel, then split in half. 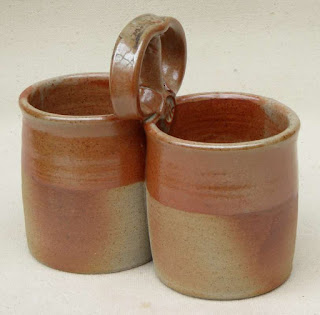 Shino seems very forgiving, and can cope with a wide range of temperature. This is a spoon organiser. 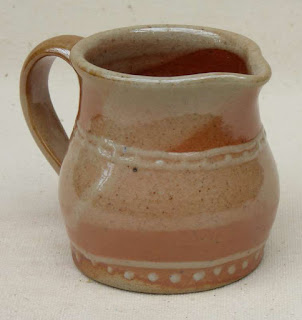 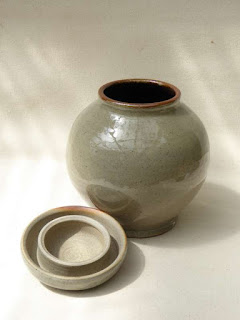 I like this urn. It isn't quite the colour I intended, but it is dignified and peaceful. The lid was quite difficult to make, as it has to fit inside and outside the pot. 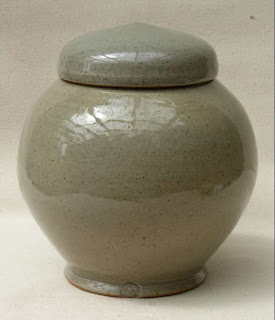 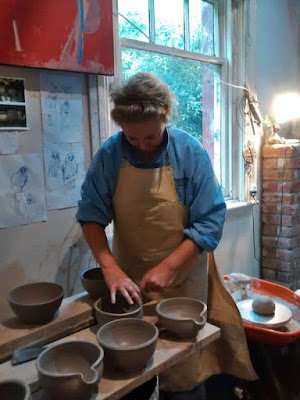 We were delighted to have a visit from a Sarah, who is a Christchurch potter. She spent 4 days working away in my studio with me, and it was nice to have company in the studio and 2 wheels going at the same time. 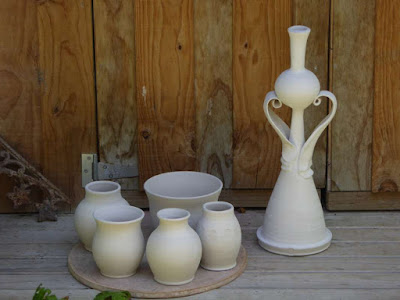 I am busy getting more work ready to fire in the wood fired kiln. The unusual looking thing on the right of this photo is a porcelain candlestick. I rather enjoyed making it, and hope to develop the idea further and make a candelabra for several candles.

your fish are great; sorry about the lack of sales and poor firings, sometimes when that happens to me I wonder if it is all worth it but I like making so I keep on; keep going with your candelabra idea I like the whimsy of the piece

Hi Linda,
Lovely to hear from you. Laura's done a marvellous job with the fish, she is clever with the paint brush! The poor firings have been a bit of a set back, but there is always something to learn from such things and it does make the good firings even more of a cause for celebration! I'm looking forward to developing the candelabra thing further, I did have some structural issues with this first one, but hope to sort them out when I do the next one. It is a question of trying something and finding what works and what doesn't!

Hi Peter sorry to hear about the lack of sales... hopefully the summer will bring out the buyers... was your visitor from Christchurch making pots to share a wood firing with you?

Hi Anna,
The unpredictability of sales is one of the realities of living as far South as we do, but things usually do improve through summer (I hope!!). Sarah was here for tuition and to practice throwing on the wheel, so much that was made was put back through the pugmill, then made into something else. She did take some nice bowls leather hard bowls home from her final day to glaze and fire.

Lovely fish!!
Also beautiful pots..sometimes the form needs to be uppermost, not the glaze colour! Nice shino. So not a bad firing atall

Hi Gwynneth,
Good to hear from you. Half the firing was OK, the other half was either throw away or sell as very cheap seconds. I certainly celebrate the successes, and am so pleased that I did a good number of shinos, as those worked well, but I do regret having lost the copper reds and other treats that were planned!

Nice to read another of your blogs Peter, even if your news was rather frustrating. We have a southern road trip planned before Christmas (2017!) and will contact you to co-ordinate. Hopefully our visit will cheer us all up! Talk to you soon. Graham & Amanda.

Hello There Graham & Amanda,
Good to hear from you. Delighted that you are planning a visit before Christmas, we will roll out the red carpet! We may also be able to introduce you to another member of the Old Post Office family.... Brian (not quite our cat), who hangs around here with roguish cunning around meal times, and vacuums up any food item that Nigella thinks not fit for her consumption... and more besides!