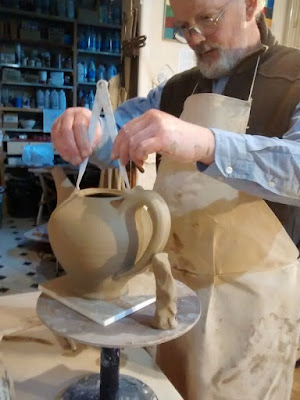 Last month I made some very large teapots, and last week I managed to glaze fire three of them. Two will easily make 6 cups of tea, or 4 good sized mugs, and the largest one (two liters capacity) will do 8 cups of tea, or 6 mugs. Such large volumes of tea call for good strong handles, and it helps to have a small handle at the front of the pot, as well as one at the back.

For me making teapots has mostly been a 2 day process, with teapot bodies, lids and spouts being made on day one, and everything assembled on day two after they have had a chance to firm up a bit overnight. The real trick with this is estimating how many teapots to make on day one, as assembling them on day two always seemed to take longer than I thought, and sometimes I would have a very long time in the studio if I had made too many on day one!

Health issues started to have an impact on this pattern of working as I often would "run out of steam" after the first day making parts for teapots and not really have enough energy the next day for assembling things, so quite a lot of lidded jars would be completed rather than finished teapots!

Happily, I have had a bit of a breakthrough with the process, and have found that I can make parts for a teapot and then complete it all in one session by making use of an electric hot air gun. I can make one or two large teapots in my working day this way, and get them finished. 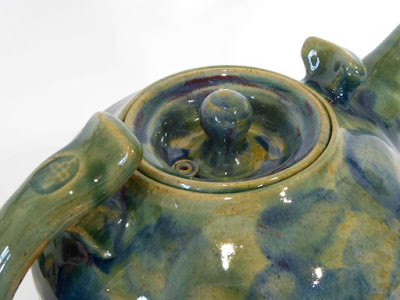 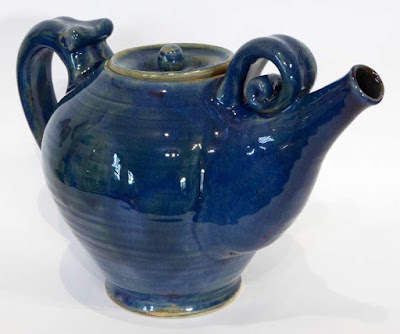 All three teapots shown above use the same two glazes, my chrome-tin red that has been modified by adding some cobalt oxide, and a layer over that of a green glaze. Glaze application was by pouring and by brushing.

I hope to glaze fire a few more teapots this coming week.
Posted by Peter at 12:30 PM

Making them all in one session I would have to agree is much better, sometimes if I leave the studio for up stairs I get distracted and don't make it back down there in time, do you make a strainer in the pourer ?

Impressive Peter, such a lot of work and attention to detail goes on here.
It is fascinating the lives we lead and so lucky that we have the ability to keep our creative juices flowing, nice work.
I too start too many projects forget where I am with them, they take longer than I thought, if I start a turning and leave it unfinished the wood moves making it difficult to work on when I get back to it.
I particularly like the photo of yourself working it says far more than words.
Nice, Thanks

Hi Linda,
I wonder how many abandoned pots there are in potter's studios, that have been left at distracted moment, and never quite returned to in time?! Probably quite a lot! It certainly helps to be able to complete things in one session if possible, although not everything can be.

I do make a strainer in the pourer. I have read of potters making tools for making strainer holes from the thin u shaped metal that is used for umbrella spokes. I was able to buy a very useful tool from a pottery supplies shop, and it certainly makes life easier!

Hello Bob,
Good to hear from you. Teapots are a particular challenge as there are so many parts of them that have to work properly, as well as look good. I'm getting a bit better at making lids that fit well, but there is always so much still to learn! I suppose that, if it wasn't hard to do, it wouldn't be so absorbing!
Your own skills working with wood are quite amazing, and I do enjoy having a look at what you are up to on your blog from time to time.
Feels like it is thinking of snowing tonight.... hope it is warmer where you are!
All the Best,

These are wonderful teapots. THanks for answering Linda's question. I'm particularly glad that you've added the front handle. I visited a "master" potter who had made elegant wares, and he made tea for us in one of his teapots...only to have the lid want to fall into the teacups...as well as the teapot not pouring as easily as he would have liked. The actions are so important in use.

Thank you Barbara,
Very nice to hear from you. So many things to go wrong with teapots! My wife once saw a teapot lid fall into a teapot that was made by a potter.. which is quite an achievement! Whilst that disaster hasn't happened to me, as yet, it is frustratingly difficult sometimes to get the lid to seat properly, and I do find that it pays to make the lid just a whisker too large as it often seems to shrink slightly more than the body of the teapot when it is drying.

Lovely teapots..see if you can find a picture of Michael Cardew's WI teapot...huge, and placed on a frame to be used!!

Nice pots! Glad you found a way to get them done in one day. You may have inspired to make some teapots. I have done any in over 4 years.

Hi Gwynneth,
I'll have a look for Michael Cardew's teapot, it sounds like fun! An American potter once showed me photos of an "Alice in Wonderland" cup and saucer he had made, I think the cup must have been about a yard high!! The Cardew teapot sounds like it might have had sufficient capacity to fill the Alice in Wonderland cup!

Hi Michèle,
Do make some teapots, I'm sure yours would be wonderful! :-)

Hi Peter I know what you mean about getting teapots put together... even the handles can be tricky with drying and fixing in time with the spout. I think mine are a bit smaller than yours but the same issues.

Thanks Anna,
Teapots are certainly a challenge, and it does help to be organized! There have been times in the past when I have wished that I had made a proper damp cupboard/room where humidity could be controlled, as it would make some of these jobs much easier..., but plastic bags are really handy.... if you can still get them!! :-)