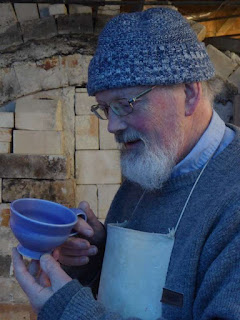 The last few blog posts have been about how I work with crystalline glazes, but that is not the only thing that I do! Whilst working on new crystalline glazed pots I was also making some cups that will be part of an online exhibition that should take place soon. I think that somewhere between 40 and 50 New Zealand potters will be taking part in this event so it should be really interesting to see how different people creatively solve the puzzle of making a cup that is beautiful, practical, and just right for a cuppa. When the exhibition goes live I will let you know. 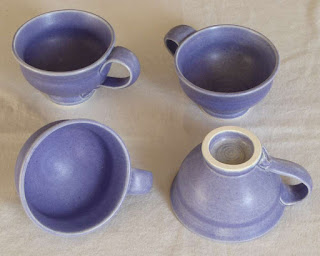 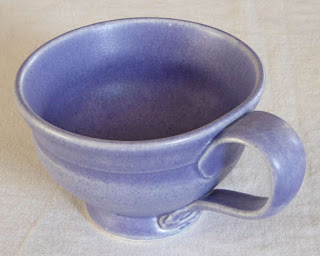 Whilst making the cups I recorded the process on video, from the centering of the clay, to making the cup, turning the foot and adding the handle. I enjoyed editing the video footage, it made a pleasant change from my usual activities, and I hope that someone might find the video useful if they are struggling with making things on the potter's wheel, or if they simply want to watch something being made.
I have signed up for a YouTube channel and have uploaded the video there and two other ones that I had on here a little while ago. It was an interesting exercise doing the YouTube thing for the first time, and I must say that the process has been made quite straight forward and there is a lot of useful help available to guide one along the way.
Having now watched a few "how to" videos about making videos I can now appreciate how much I have to learn, and I can see that I need to invest in some studio lighting if I am going to do many more of these "how to" videos, and I also need to think more about sound, but it is a start.
Here is a link to the video about making cups
Winter is "biting" this month with frosts most nights and fairly chilly day time temperatures. Really this is how it should be, last year we had no real winter at all with only 3 or 4 frosts and few genuinely cold days.
To ensure that I could still have some hope of growing something green and edible over the next month or two I rounded up some old concrete blocks that were left over from other projects, and built a raised vegetable garden that is in a sunny spot close to the chimney end of the wood fired kiln. 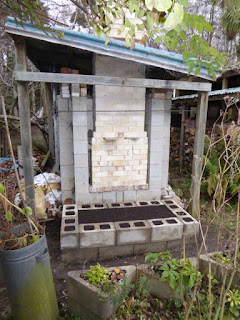 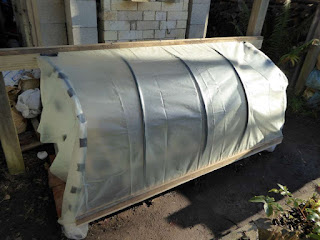 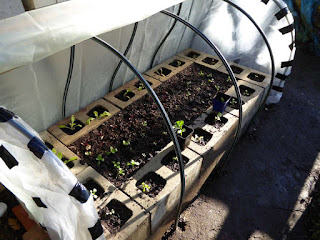 The concrete blocks looked very grey and like something out of a totalitarian regime, but planting out my vegetable seedlings and giving them a polythene cover to shelter under has made it more cheerful! 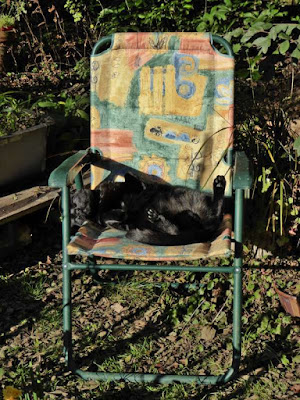 Mr Smaug supervised the construction of the raised veggie bed and the process was so exhausting that he fell asleep a few times on a handy chair in the sun!
The poly tunnel cover has proved irresistible to him, indeed he assumed that I had made it especially for him to occupy. He was disappointed when I closed off both ends of the tunnel, and spent quite a bit of time over the next two days circling the bed and testing it for hidden doors or weakness.
On one frosty morning he climbed on top of it and walked along the wooden ridge a few times before becoming excited by the chunks of ice that were on the polythene and batting at them with his paws. He then discovered that it was fun to slide around on the polythene itself!
It was funny to watch, but a worry too, as 6.5 kg of a playful Mr Smaug is quite a lot for a poly tunnel to put up with. I managed to distract him and happily no damage was done!
We have been opening our little gallery most week day afternoons and also on Sunday afternoons for the last two or three weeks now. It being winter we have some days where we see no one, and others where we can be moderately busy. It has been delightful catching up with returning customers and new ones. When there was community transmission of Covid-19 we kept shut, but things feel reasonably safe in New Zealand right at this moment, so we are happy to be open.
It is sad to hear news from the rest of the world, and we do think of family and friends in far away places. We have been very lucky that our government "locked us down" here so soon and so completely as they did, before the virus got too well established. It would have been a tough call for the government to make at the time, but it was the right one.
Posted by Peter at 3:52 PM

I always enjoy reading your story Peter, its also a good link to what is happening in another part of NZ, I am so pleased that you have been opening the gallery doors and getting visitors.
Today I put up a stall in our little market as the weather forecast was for fine, I was surprised to see a few people and sold 3 items.
You must be finding that your visitors are all NZers its a good opportunity for us to see our own country.
The cups you show have a very appealing line to them, making a recording of your progress adds another layer of fun to the day, I photograph much of what I do then post the story on the Canadian Woodworkers Magazine web site the following comments are something to look forward to.
Best wishes to you both.
Bob

Very nice to hear from you. Glad that you have been selling some work at the market, it is good that some people are out and about in spite of it being winter and no overseas tourists.
I must look up the Canadian Woodworkers Magazine web site, it is wonderful that you have found a supportive group of people there.

All the best from us both to you both!
Peter & Laura

Beautiful cups!
Glad to hear that it is safe for you to open your shop now. We continue to be closed, despite the fact that our government says it's okay. The county we live in has become a hot spot for Covid 19. We are not taking any chances. We only go out to grocery shop and occasionally for garden supplies. Too many here are not taking this seriously.

Your winter garden looks great. It was fun to read about your cat's antics! Jeff is planning to grow things this winter. He is going to give a small hydroponic system a go in our basement. We have French doors at one end of the basement and gets good morning sun.

Hi Michèle,
Lovely to hear from you. Really hard time for you with the Covid 19 being right out there in the community, and you are wise to not take chances. We were very slow in opening our gallery again after the virus, and still try to be careful about things even though NZ currently has no known community transmission of the virus and there are only cases of it in people who have recently returned to the country and are in managed isolation. We can only hope that an effective vaccine is developed, or that the virus loses its potency. It sounds a good idea to grow vegetables hydroponically, I hope that it is a great success. I think that these strange and challenging times do make growing what we can all the more important. I'm already planning another raised bed (probably 2 more!), so that I can get a crop rotation system going.
All the best to you and Jeff, you are very much in our thoughts.

We like those cups!
Well done on the veggie front, brilliant using the hollow blocks end on.
NZ could have locked down even sooner, it was politics that delayed matters. Also politics that caused problems since! Otherwise we would still be in your lovely country.
It seems no time since mid February, yet it is over five months. We are missing all our Aotearoa friends..and relations, now that the ones we saw in Taupo Bay are confirmed as my third cousins...once removed 😄
Lovely glaze on those cups too.

Good to hear from you. It is amazing how fickle time is, February seems like last week... or years ago. I think of us enjoying pizza together at Karitane, and chatting with you and the Pirate back at our place, and it seems very close, but also far away! The Covid-19 thing, with lock downs and other changes to daily life, really messed with time and the idea of days of the week.... and I'm confused about the day of the week at the best of times!
Thanks for the encouragement regarding the cups, I will be unloading some more from the kiln later this morning... and I am "with baited breath" regarding a new glaze!
Kind Thoughts to you both from all of us here at the Old Post Office!